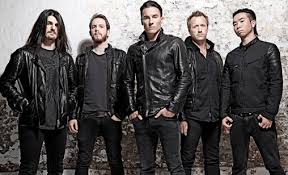 Damian races to the Asylum in Brum to catch Toseland.

The end of Redline’s set proved they were a meaty proposition, one of the songs was a tribute written for the Isle of Man TT Motorcycle races called “King of the Mountain” off their album Vice is particularly impressive.

Rival State’s no frills approach sees them blast straight into their set which covers most of the tracks from their “Youth Tax” EP including the superb “Aces”. The Kiwi band seem a lot heavier than last time we saw them, but maybe that’s down to touring with the Black Spiders and Wednesday 13. A half hour show is topped off with the marvellous track “Sleep Talker”. A short but great set from a superb band.

A superbikes champion? Grade six pianist? Married to Katie Melua? You can  go off people, can’t you. The fact is, though Toseland is one of those people its impossible to dislike.

He and his band arrive on stage with little fanfare apart from some helicopter background noise and head straight into “Gotta Be A Better Way.”  Tracks from Toseland`s debut album “Burning The System”, “Life Is Beautiful”  and “Kingdoms” all get an airing. James shows off his ivory tinkling talent with the ballad “Just No Way” in which he plays the piano.

Toseland have a new EP called “Hearts and Bones” to promote and as well as the title track, there’s time for  “The Closer I Get.”

Mr Toseland got himself on the starting gird with some great musicians Zurab Melua, his brother in law on guitars, Ed Bramford  on guitars, Roger Davis on bass and new recruit Joe Yoshida on drums and the band really rock. They also seem a band that are very happy with themselves and comfortable with each other, which shows in their playing. The set for tonight is concluded with the track “Singer in a Band,” which in many ways seems to be their anthem.

When the band re-appear for the inevitable encore, James shares the good news that the band have just signed a record contract. They celebrate with an excellent cover of the Teardrop Explodes number “Reward” which is on the new EP and finishes with the title track of their  album “Renegade”.