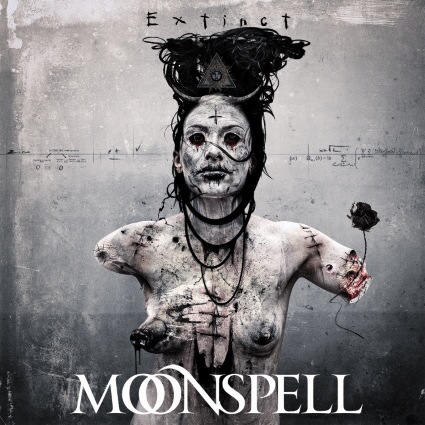 When Moonspell played Bloodstock a couple of years back, they did so in a mid afternoon slot on the big Ronnie James Dio Stage. It was a brilliant gig, of course it was, but there was something about seeing the band in the light that didn’t seem proper. This was music, this is a band, that needs darkness to thrive.

Fast forward to now, and the Portuguese are back, with this album. “Extinct” is – almost from from the second it opens – an incredible record. Brilliantly played, and it sounds huge. But it’s far more than that.

Opener “Breathe (Until We Are No More)” sets the scene perfectly. Indeed, all the qualities that set this album up as a bit of a classic are all here. It is a slow building song, and one which views genres as something that lesser, mere mortal bands, concern themselves with. Moreover it – like the whole of “Extinct” –  has a grandiose quality, that sees the record become almost power metal on occasion.

The title track does something else quite marvellously too. It uses clean and harsh vocals to stunning effect as Fernando Riberio shows off all his range, before a brilliant guitar solo from Ricardo Amorim.

But if that was all very good and all, what follows makes that look like demos. “Medusalem” adds some Eastern Tribal rhythms to a track that could have come straight off Paradise Lost’s wonderful “One Second.” A fast rocker, it provides a quite obvious highlight here.

“The Last Of Us” extends the PL feel a little further, as it broods it’s way through, before finding a strangely euphoric chorus during which Riberio concludes that his “curse is to love you” and in so doing manages to encapsulate the feel of the whole record.

There is room, of course, for a dark ballad, and “Funeral Bloom” initially appears set to deliver on that promise, before building to something else entirely, instead it leaves the gloriously brooding “The Future Is Dark” to fulfil that role.

Perhaps “Extinct’s” most surprising moment is saved for its close “La Baphomette” sounds like the soundtrack for the darkest and most sleazy of film noir’s – it makes for a jarring close, but highlights a band that isn’t scared to make the record it wants to make.

And what a record it is. On early works such as “Irreligious” and “Night Eternal” they wowed everyone. On “Extinct” though, not only have they proved they are very much alive, but Moonspell might just have hit a career high.