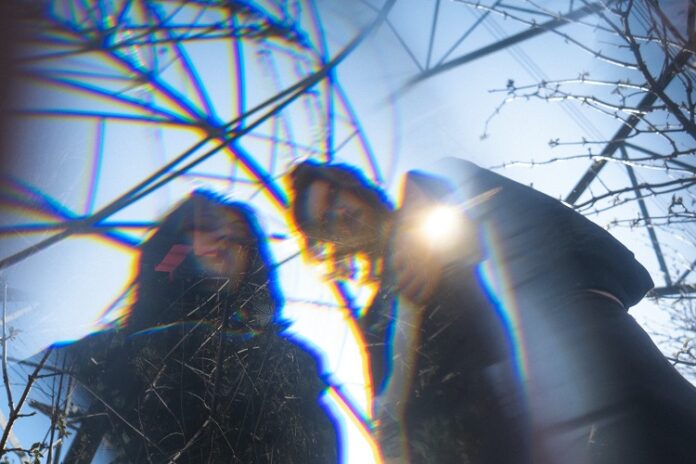 Two years can be a long time; two years is a long time. Two years ago, BLOODHOUND had just released their debut album, Fragile Skeleton, to appropriately monstrous applause and toured it up and down the country with like-minded brethren Faux Pas and Brooders. Audiences could be seen visibly shocked at the unhinged power and coruscating melodies coming from the stage; BBC 6 Music were playing their songs with unbridled glee; and reviews were rolling in on a wave of great acclaim.

Then we all know what happened.

But BLOODHOUND, joyously, recently returned to release their new single, A MESSAGE, and now follow it with a suitably claustrophobic – despite the open fields on view – accompanying video.

Watch the video to A MESSAGE here: https://www.youtube.com/watch?v=Cgg1Rz7OBWI

A MESSAGE sees the band discovering new ways of constructing noise; of utilising guitars that sound as though razor wire has illicitly embroiled itself with squealing buzzsaws; of pursuing melodies that were surely heaven-sent.

The song is about completely shutting down and being enclosed in your own mind. About considering nothing but your own thoughts. About pushing people away but not knowing why. The colossal chorus teams with an overriding theme of haunt and melancholy all heavily influenced, as the band readily agree, by early noughties post-punk and shoegaze.

“Interpol was our main influence,” explain the band.“We wanted a jarring guitar line that sat underneath a dark, despondent melody and an atmosphere that consumes the listener. The chords for the chorus came from a demo written about four years ago. Max wanted to throw the song away, but Bex convinced him to keep the chorus and recycle it into what became A Message.”

Expanding further, they add, “Most of the song was written before the first album came out, so we felt it was ideal to be the first release back after two years away. It’s short and to the point with plenty of melancholy and a hard-hitting chorus. It’s been a hell of a long journey to get here, we’ve been through thick and thin over the last two years – loss, setbacks, arguments, break ups, turmoil – so there’s a lot for us to let out. It’s the most explosive way for us to return.”

The band worked with Adam Bairstow from Brooders in recording, producing, engineering, and mixing the track, then went to Pete Fletcher at Black Bay Studios for mastering. A music video has been filmed for the single in their home city of Hull and will be released shortly.

Listen to A MESSAGE here: https://soundcloud.com/bloodhoundhull/a-message-single

BLOODHOUND thrive equally on the stage as they do in the studio, so live dates are naturally being arranged. A headline date in their hometown of Hull and two free entry dates are now confirmed as follows with more to be announced shortly: