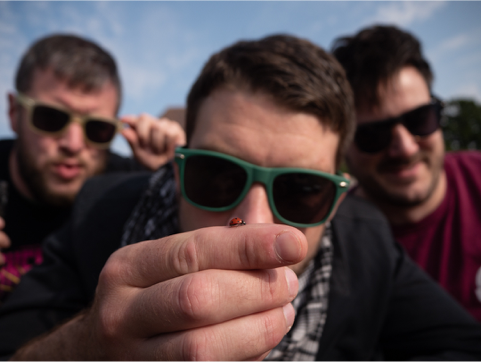 The kings of irreverence and tongue in cheek DIY, The Melbies proudly release their debut album, ‘Song for Harambe (Vol. I)’, on 27th May on Bad Granola Records.

Their first release since reforming under the new name, and first since joining the roster of Bad Granola Records, ‘Songs for Harambe’ sees The Melbies in their best form yet. With the powerhouse that is James Nesbitt having joined on drums, The Melbies have been set free, amping up the fun and creativity whilst sticking true to their power riff roots.

The album includes 3 previously released singles, (Brother, Reboot Me and I’m Sorry Indy) along with 10 brand new tracks, ranging from thought provoking harmonic punk, to self-mocking comedy, to ska-punk influenced hark backs to the TV of yesteryear. Every single song has a story to tell, and every story told is different.

Check out the video for Reboot Me an up tempo in your face song, about the grind of life getting you down and the weekly cycle of all and no play. Watch the video here: https://www.youtube.com/watch?v=QXtYCpnds2w

‘Song for Harambe (Vol. I)’  was produced by Charlie Creese at Magpie Studios, Kent between 2019 and 2021. Originally due to be just an EP, then two EPs (‘Vol. 1’ and ‘Vol. B’, naturally), then something called COVID happened and the band realized that, given the extra time to finish it off, they had actually made an album; argument still rages as to whether this was on purpose.

The artwork is by the fantastic Laurence Crow, with the back showing Harambe caged, the cover shows Harambe triumphant in heaven and surrounded by bananas, as he deserves.

Having recently played shows supporting The Wildhearts, Splodgenessabounds, Department S and The Vibrators, The Melbies will play a special album release show on 29th May at the New Cross Inn in London.
The Melbies are:Dan (Daniel Drew) – Vocals and GuitarMac (Sam McNamara)– Vocals and BassNesbo (James Nesbitt) – Drums and Backing Vocals