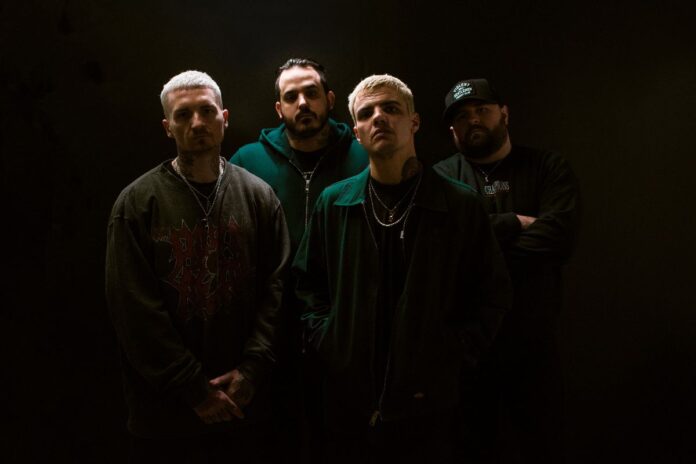 Long Island, NY hardcore heavyweights, Stray From The Path, are back and they’ve announced their new album, Euthanasia. Due out September 9th via UNFD, Euthanasia is the darkest and heaviest work of the band’s career, drawing on challenging circumstances to create a record that pulls no punches sonically or lyrically.

To mark the announcement, Stray From The Path have shared their vicious new single, “III.” The track follows early single ‘Guillotine‘, and utilises the band’s signature blend of groove-laden guitar work, intricate-yet-pummelling drums, and socially-conscious lyricism–but now packing an ominously crushing chorus that demonstrates some of the brooding new atmospheric elements present on Euthanasia.

“Stray has always used our songs as an outlet to speak against oppression”, say the band. “It’s been close to 10 years, and now our third instalment of the Badge and a Bullet series entitled “III” has the same target. Policing in the United States has always been rooted in racism, hate and violence. Public funding for police departments has skyrocketed since the 1980s. The US now spends more than twice as much on police as it does social welfare programs. Many major cities spend over a third of their budgets on police. Despite the hundreds of billions of federal, state & local money poured into police departments & the corrections industry every year, there is little oversight. The outcomes have been f****** horse s**t.

Over 1,000 people are killed every year by the police but despite comprising only 13% of the population, nearly half of all people killed by police are Black. Less than 1% of police officers who kill someone on the job are prosecuted.

To be perfectly clear: there is no crime in this country where the punishment is execution on the spot extrajudicially by a cop.

The only protecting and serving the police do in this country is protecting the wealthy, the powerful and capitalist interests while subjugating the marginalised and the working class.”

Stray From The Path have been bringing their charged-up hardcore fury and politically outspoken lyricism to the masses for the better part of two decades, aiming to be the kind of band that can be a gateway to both heavy music and radical ideas. While the long-running group shows no signs of slowing down, Euthanasia was by no means an easy record to make. Stray From The Path found themselves in a fractured state due to the pandemic, an ocean of distance, and even a literal broken back, resulting in an album that reflects the grimmer personal and global circumstances. Produced/engineered by Will Putney (Knocked Loose, Body Count, Every Time I Die), Euthanasia is clearly the work of a more weathered and visceral era of Stray From The Path–the tremendous riffs and hip-hop-meets-hardcore vocal cadences are still there, but this time they’re accompanied by an apocalyptic mood that draws the listener in and doesn’t let go.