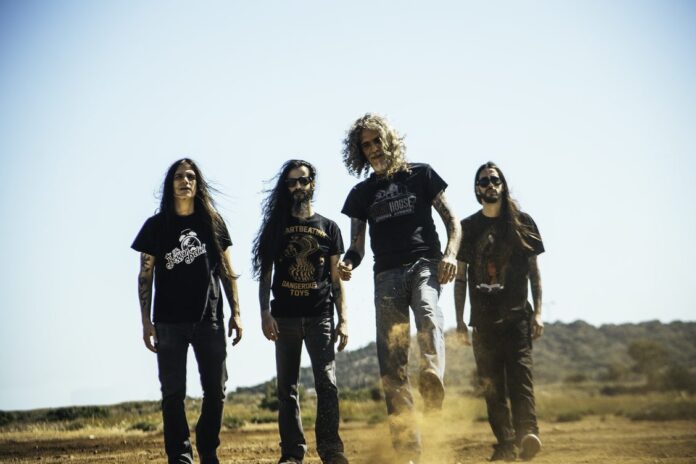 The pre-eminent godfathers of Greek stoner and hard rock, NIGHTSTALKER are set to start their first UK Tour this June in celebration of the 10-year anniversary of their 2012 hit album ‘Dead Rock Commandos‘. The album which induced the birth of the Greek rock anthem ‘Children of the Sun‘ and has the seal of approval of Black Flag legend Henry Rollins, is being celebrated across the UK with dates in Glasgow, Manchester, London and more.

Their latest album, 2019’s ‘Great Hallucinations‘, with its groovy, catchy riffs and deep expansive psychedelic tracks, is the most mature yet trippy body of work that the band has produced to date. Join Nightstalker this June for some intoxicating psychedelic tracks and get your dose from the pioneers of Greek hard rock.

In addition to the tour, the band are also releasing a 10th anniversary boxset of ‘Dead Rock Commandos’. The boxset includes a Transparent Vinyl, Digipak CD and a Photobook and is available here: https://nightstalkerband.com/product/dead-rock-commandos-lp-10-year-anniversary-boxset/

The band comments: “It’s been 10 years since we released ‘Dead Rock Commandos’ and we know many of you have been waiting for a re-issue of the CD and Vinyl.. Wait no more! We have prepared not only these re-issues but a limited edition boxset (the first of its kind) with a special signed CD packaging, a transparent limited vinyl edition and a photobook around the Dead Rock Commandos adventures curated by us. Our live performances for the rest of the year will be dedicated DRC shows, including the UK tour and selected Greek dates.”

From Greece to the Balkans and all over Europe, Nightstalker have electrified crowds for 30 years, and are showing no signs of stopping. Having toured and shared the stage with rock royalty like The Ramones and Uriah Heep among others, they never tire of performing live. In fact, they thrive on it!

Nightstalker was founded in 1989 by frontman Argy and solidified their line-up when they recruited bassist Andreas Lagios (ex-Rotting Christ) and guitarist Tolis Motsios. In 2009 they signed to US label Meteorcity Records, and quickly received international acclaim. Three years later, Nightstalker released ‘Dead Rock Commandos‘, a standout album that earned them thousands of fans worldwide and produced some of their biggest hits, solidifying them as legends in the hard rock music scene and establishing ‘Children of the Sun‘ as an anthem that would personify the Greek Rock scene for years to come.