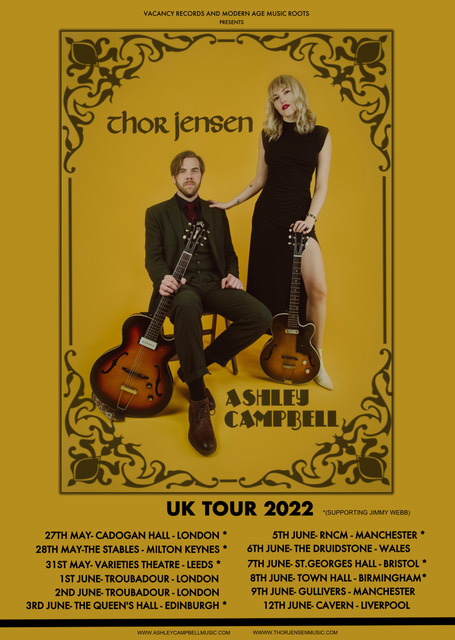 Vacancy Records artist Ashley Campbell will be performing two headline shows at The Troubadour in London with Thor Jensen, and will also be supporting songwriting legend Jimmy Webb on his tour.

Ashley Campbell and Thor Jensen form a unique meeting of musical genres. With Ashley coming from the world of country and bluegrass and Thor having a diverse background from rock to gypsy jazz, they create a fresh sound as a duo.

Ashley Campbell, daughter of country legend Glen Campbell began her career playing in her father’s band on several world tours and has found success as a solo artist in the country music scene; most notably with her debut single “Remembering” which she wrote for her father. Her original music has taken her all over the world, from China to Japan, to the mainstage at London’s O2 Arena to opening for Kris Kristoferson and the Bellamy Brothers. She has also been spotlighted for her banjo playing with Rascal Flatts in the music video for their hit single “Banjo”.

Thor Jensen, a virtuoso guitarist and songwriter from New York has traveled many diferent roads. From touring the world with Hazmat Modine, playing Americana with Quiet Life opening for the likes of Dr. Dog, Portugal. The Man and Shovels and Rope, then onto joining the Stephane Wrembel Band, playing the music of Django Reinhardt, performing at Carnegie Hall and all over the world, all the while immersing himself in New York’s jazz scene.

Ashley and Thor met in late 2021 and have been playing music together ever since, having recently recorded several singles. Both being strong instrumentalists in addition to the combination of Thor’s deep baritone and Ashley’s clear as a bell vocals, together they make a one of a kind blend. Keep an eye out for more music from Ashley and Thor

said, “Some of my all-time favourite music memories are from touring in the UK. The fans are such true music lovers and such a joy to play for. I am beyond thrilled to be returning! I can’t wait to share my new music live and in person and definitely hit a few pubs along the way! Thank you for having me back”.
Ashley Campbell