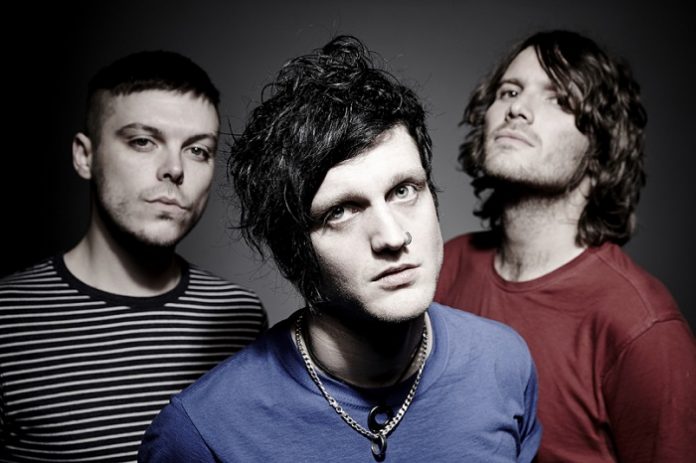 The swanky Ny-Lon bar in the O2 Arena is the type of place that MV doesn’t often find itself in. A cocktail lounge done out like an airport departure area isn’t the place you’d normally find rock n roll in either, but this afternoon its doubling as the press area at the inaugural Stone Free Festival and sitting waiting for The Virginmarys is an interesting exercise in people watching.

Harassed PR people mill about trying to keep things run smoothly, and the odd rock star is popping in and out, new blues man Jared James Nicholls smiles a polite hello, members of Aussie all-girl group The Lounge Kittens wander past, and there’s plenty of comedians having a chat, and there’s the natural “haven’t I seen him on the tele” type thoughts running through our heads.

The reason for this hiatus is that while Michael Monroe plays downstairs, the three members of The Virginmarys are being interviewed within earshot. This is always fraught with danger especially as you can hear the questions, “shit” you think. “I was gonna ask that,” or worse still “the band ain’t half going to be pissed off by the time they get to me.”

When that time comes – after another round of “haven’t I seen you on TV….” – things are a little behind so the Record Label press lady sends singer Ally off to do one interview, while the remaining two sit with MVM, which is why Danny Dolan, the bands drummer and Matt Rose, their bassist, find themselves answering questions about Alice Cooper’s snake.

Allow us to explain.

About an hour before we sit down, The Virginmarys had delivered a blistering set to a packed Indigo2 – which is doubling as the second stage today – and during the course of it, Ally had mentioned they had been held up by Alice Cooper’s snake, and that does rather seem like the place to start.

“Yeah man! Alice Cooper’s gear was being loaded in before ours, and we see this big basket and its got his snake in! Cool, huh?” offers Danny, and if there’s a friendlier man in rock then we haven’t met him, before adding: “here, look.” And with that he hands MV his phone, where there are pictures of the reptile.

No need to ask, then, who they are looking forward to seeing later on. A point which Danny confirms: “Definitely we want to see Alice, none of us have, so we are looking forward to that”. MV asks Matt if he will be making any special efforts to see any of the remaining acts and he’s disarmingly honest: “I’d like to see Therapy? [who are on after Michael Monroe] but other than that I am not too familiar with most of them, I’ve had my head up my ass for the last couple of years!” he laughs.

Such ignorance for modern rock is perhaps understandable, given that the band have most recently been writing and recording their second album. The brilliant “Divides” took things up a notch from the debut – and that was good. The guys are clearly pleased with it too, even if they are far too modest to actually say it outright. In MV’s review of the album, we wondered if it a record borne out of frustration, but Matt has a different take on it: “It’s more to do with frustration, I think” he suggests. “Ally writes the lyrics, and I think its him saying ‘it’s a shit world out there, I mean you only have to look at the news [the interview takes place just a couple of days after the murder of the MP Jo Cox] which is why its got the message of hope on there too, at the end, “Living In My Peace” which is about everyone sticking together in spite of it all. “

Certainly it feels a little more mature than the debut “King Of Conflict record. Whereas that one was the soundtrack to your – and possibly their own – Friday nights out, “Divides” seems to find them waking up on a Monday morning facing the world head on.

There are other changes too. The first one had the band team up with Toby Jepson, “Divides” saw them work with producer extraordinaire Gil Norton, who has a list of credits that would make anyone jealous and it’s clear that the pair thoroughly enjoyed the experience, with Matt saying, almost in awe: “Here is a man who worked with The Pixies, you know? And I’m not blowing smoke up anyone’s arse here, but it was an absolute pleasure, he was a real gentleman and we learnt so much from him, I hope we can do it again.”

“Again” is the operative word here, because it turns out there was so much material from the “Divides” sessions they could actually release another record: “We’ll do something with it,” confirms Danny, “maybe an EP or something.”

If that is a little up in the air, then the sticksman is very clear on one thing. They will, as they say, be coming to a town near you soon. “I want to tour, and just keep touring. We are a live band, and we just need to get out and tour this record and let people hear it. Shows like this are great, it gets us in front of other people’s fans and people who might not know what we do, but we want to be out at our own shows and hit everywhere we can in the country. “

And not just this country either, but across the pond. To that end they are off on the road with the mighty Crobot in the US, and then there’s a little gathering called the Reading Festival later in the summer, and its this, reckons Danny, that will define the band moving forward. “We are happiest on stage,” he suggests, “and whilst we don’t ever want to forget we are a British band, then absolutely we want to make a go of it over in America too. It’s hard work but we will give it our best.”

You imagine they will too, and there’s a job to be done tomorrow too. No sticking around at aftershow parties for the trio, “nah, no time for rest,” smiles Matt, “we’ve got a gig in Bristol tomorrow, so that will be cool.”

First, though there’s tonight and the affable Danny has other plans: “Let’s have a couple of beers watching Alice Cooper,” he offers.

Minus the snake, hopefully.