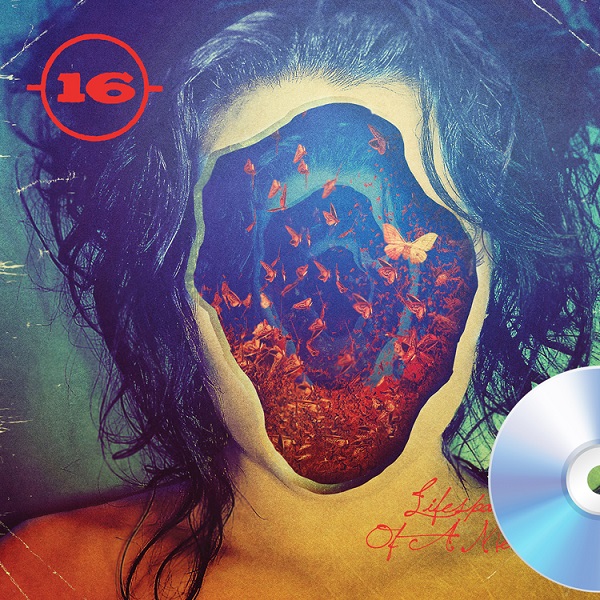 Be afraid, be very afraid

When -(16)- claim that “Lifespan Of A Moth” is their darkest, most visceral and complex work to date, and further that it is the sound of 25 years of wallowing in anguish and addiction, then you’d best take notice.

After all, this isn’t a band known for its regular work at school discos at the best of times, but there’s no doubt that here, on “…Moth” – their seventh studio record in 23 turbulent years since their debut full-length – they are saying effectively: “yeah, but what if there was no light at the end of the tunnel, what then….?”

Because the eight tracks here are so viscous, so overbearingly bleak and so deeply unsettling that that listening to the record is an almost draining experience.

“Landloper” which kicks things off, begins with the sound of children playing by the sea, but soon finds its groove – literally – with an enormous riff and with the heavy treatment on Chris Jerue’s vocals this is an opening seemingly designed to sort out the weak from the ready. “Join us,” it seems to say, “but only if you dare….”

“Peaches, Cream And The Placenta” – and not many lead tracks (you hesitate to call it a single) are called that – takes you deeper into the nightmare, and over a riff that is even more monolithic into a place where private hell is made public.

And where some albums, some bands, might offer light and shade, not here. –(16)- only offer something more crushing, “The Morphinist” possesses an ethos which makes Eyehategod look like One Direction and if “The Absolute Centre Of A Pitch Black Heart” does speed things up to an almost Helmet type place, then its only so they can kick you in the nuts harder and faster.

“Gallows Humour” on the other hand – a sprawling epic of a thing – takes its time to do its stuff, and is perhaps the heaviest thing on here, with the scent of Crowbar never too far away, and how Bobby Ferry gets his riffs to be quite so oppressive and all-consuming as the one on the superb “Secrets Of The Curmudgeon” only he would know, but he does – frequently – and “Pastor In A Coma” which is perhaps the absolute epitome of the bleakness that beats in the heart of this collection, seems to descend deeper into some nightmare.

Ending with George – and taking the line of that Seinfeld character “it’s not a lie if you believe it” as its central pillar – it’s a clue that there is no prospect of any happiness here, no redemption, and no hope. “I was raised to give up/horse manure is not that bad” offers Jerue and whatever that’s a metaphor for, you suspect you wouldn’t want to know.

“Lifespan Of A Moth” is one of the most nihilistic records you will find this year, and if that sounds like your bag then you will find much to if not exactly enjoy then certainly to compel. Enjoyment, though, is not the point.