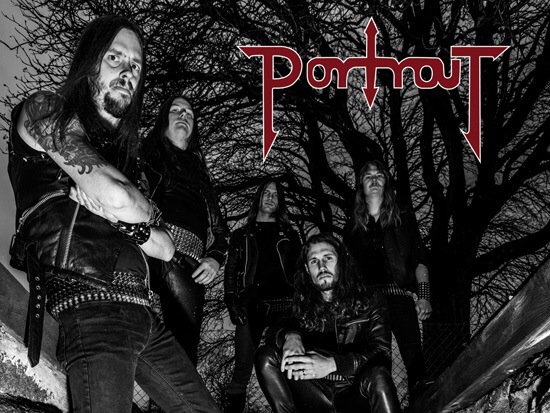 For some it would be a tshirt with a cool slogan. For others it would be a mission statement. For Portrait, though, you suspect that these words are a way of life.

Dedicate your life to metal. Or die.

The words are on their garments at the merch desk, sure, but they also pass their lips more than once during the course of the time that MVM gets to spend with the band pre-show in Birmingham.

To Portrait, it’s almost like a mantra: “You have to give your all to this. It’s a case of dedicate your life to metal or die.” Seays one of the bands two guitarists, David Olofsson. Olofsson is a man with more than a touch of the young Dave Mustaine’s about him, although happily not in attitude. He is – like the rest of his bandmates – extremely pleasant and gracious (even telling drummer Anders to stop playing with his phone while we are talking!) and clearly very happy to be in the second city, where the music he loves began: “We’ve waited our whole lives to be here!” He says excitedly.

Olofsson and the other guitarist, Christian Lindell do much of the talking. Lendell expands on the bands classic metal sound, putting it in very simple terms: “When I was a kid growing up, I just liked the old metal better,” says the six stringer in his perfect English. It was this love of the 70s – bands like Thin Lizzy, Iron Maiden, Sabbath and Priest are spoken about with reverence – that colours a lot of what Portrait do, as does, let’s be honest here, Mercyful Fate. “Yeah,” says Olofsson, “there’s a lot of the occult type thing in what we do.

What they do, consists of a couple of full-length records and a split EP with countryman Ram last year, and a rapturously received demo from a few years back. The band formed in 2004, and emerged in typical old school fashion, from the tape trading scene. It’s something the band obviously miss: “We were just kids,” says Lindell. “But I miss those days, the fanzines, the tape trading, it made the whole thing much more real than it is today. Fans could interact with their favourite artists, read about them, get to know then in interviews, you could sell direct to fans,” he says, almost wistfully. “I think we are missing that.”

MVM puts it to the band that the surely with the advent of the internet those days are surely returning, but the idea is quickly rebuffed. “No, I don’t think we’ll ever get to that point again.” Says Lindell, before singer Per Lengstedt chips in: “The online world is too impersonal.”

You get the sense that contact is very important to these five men. This line up has been stable for a couple of years, but that hasn’t always been the case. In fact, previously there had been a bit of a revolving door when it came or members of the band. Those days look to be over. Christian is particularly upbeat about the prospects for the future: “I think you are finally seeing the real Portrait and what we are capable of. We are glad to be coming over to the UK for a full tour with this line up. Everyone is getting on really well and the performances have been great.”

As, apparently, have the shows. This trek, dubbed The Seven Ageless Rites Tour, has seen Portrait play their first ever tour of the UK and it’s been going well: “There have been crowds at all of them,” says Christian looking relieved. “Even the ones on work nights, they’ve been good shows, this is Friday night in Birmingham, it’s going to be awesome!”

Previously they had played the odd gig in Ireland and had supported Primordial, a duty they were going to perform again the day after we talk and one which they were clearly looking forward to doing again. However, the feeling is mutual it seems, as the doom legend’s singer Nemtheanga is a huge fan of the band. “We can’t wait to play with Primordial again,” smiles Per. “They are great guys, Alan [Averill, Nemtheanga’s real name] came to the show we just played in Ireland and it was great to see him.

Portrait too, have clearly never forgotten their roots as those tape-trading kids. The band used a night off last night to go and watch Saxon play in nearby Wolverhampton. Not for these boys any red carpet either. They were standing, as fans, in the crowd. “They were brilliant,” says Anders. “Just a brilliant gig!”

MVM mentions to the band that we were there too, and asks what they thought of Hell, who performed main support duties. A band that Portrait share a sound with, if not quite the theatrics, we expected them to be fans, and weren’t disappointed. We also should have known that these guys, with their encyclopaedic knowledge of all things heavy, wouldn’t have popped their Hell cherry last night either. “We’d seen them before, and we love them,” confirms David. “The thing about Hell is they are the tightest band you are ever going to see. They don’t do anything without planning it. They are incredible.”

Portrait reserve similar thoughts for their support bands on this tour, and are actually prepared to do a sales pitch: “You must make sure to watch Rabid Bitch Of The North” they tell us. “Those guys are just amazing. And Toledo Steel [who have partnered on most of the shows] too. Some really cool stuff.” At this precise moment, as if on cue, the dressing room door opens to reveal ROTN singer Johnny standing there: “Sorry,” he smiles. “I’ll come back later, I’m the band fluffer and was going to get them …..ready.” A little later, when Rabid Bitch open it is the guys from Portrait that are down the front, feet on stage headbanging. It is quite clear there is a really decent spirit here.

Last years “Crossroads” album, which emerged on Metal Blade in the spring of 2014, was a veritable metal Tour De Force, but one which comes at a price. In common with most bands at this level, most of Portrait are in full time employment, while David, a student, faces the prospect of having to do make up tests when he returns back to his native Sweden to avoid failure. He is philosophical on the situation: “There is nothing we can do to change it,” he shrugs. “It’s the way it is. We don’t look on it in a bad way, we look on it as a positive. Everything we do, it’s so we can afford to do this. It’s so we can come to places like Birmingham and play our music, that’s all that matters to us.

Watching them on stage just a few hours later, it’s tough to disagree with anything he’s just said. Unrecognisable on stage as the laid back, gentlemen who were dressed in jeans and tshirts. All of a sudden they are leather clad metal madmen. Per is the most striking in his change. Talking quietly in the room, with his hair tied back and a lived-in red shirt on, he his transformed behind the mic as a rock god. Portrait do look like they were born to do this and they look like they know how lucky they are to be given the opportunity. Just like any metal fan would be.

More than just fans, you sense that Portrait need this. It’s their very lifeblood. Dedicate your life to heavy metal or die. To Portrait it’s more than some printing on the back of a black shirt, and that, right here, right now, is a fact.