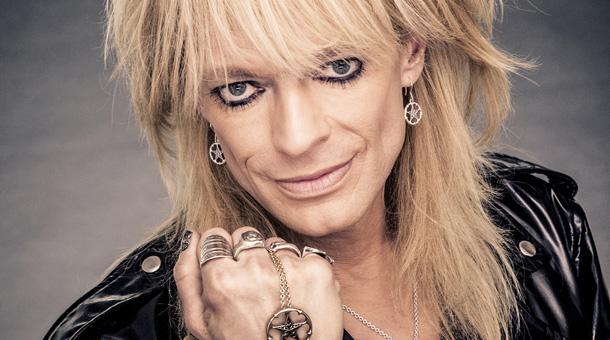 Fitness regimes, solo records and being happy with the rock n roll legend

Well you see, rock n roll is a healthy lifestyle. You gotta keep fit if you want to rock n roll properly.”

Not the normal sentence you hear from the lips rock stars you interview, which is what MV says, the person on the other end of the phone laughs and says: “maybe not, but the world is changing, man. No one wants to give up their hard earned money to each some fat bloated guy who can’t entertain, so you gotta keep fit!”

It seems he’s always been like that too: “oh definitely, it’s an obsession of mine, giving the best show possible to people. Even when the guys in the old band were doing whatever they were doing back in the 1980s, I’d be in the pool doing laps. We don’t get a pool these days, so it’s the gym.”

All of this might make sense when the full facts are known. The person with the keep fit regime is Michael Monroe, who even at 52 hasn’t got an ounce of fat on him, and is as sprightly as they come, oh and the “old band” that’s Hanoi Rocks. Not too shabby huh? As MV has casually – perhaps too casually given the gravitas of the event, pointed out to the the legend – and cut it any way you like, that word is apt – one of the first times we saw him was supporting Motörhead where he was hanging from the balcony at Wolverhampton Civic Hall seemingly without a care in the world.

A few years on he laughs at the memory, “yeah I do tend to swing from things,” he says. The mood just takes me, you know?”

We are on the phone to Michael just days before the release of his brand new “Blackout States” record and just a couple of weeks before his UK tour is due to start in Birmingham. “…..States” is a phenomenal piece of rock n roll. And when we put it to him that he seems happier in his recent three magnificent solo records than on his Hanoi Rocks work, he’s surprisingly quick to agree: “Look I love Hanoi Rocks, and I love that people dig those records, but for me, the solo records have always been more representative of me, and who I am than anything else I do.”

That he says that is interesting because 26 years ago, MV didn’t know Hanoi Rocks – pre internet kids, ask your parents – but we did know that Michael Monroe’s “Not Fakin’ It” record was brilliant, we knew that the glammed up star who made it looked like he shoulda been in all our favourite bands at the time, and we knew that a couple of years later he played on Guns N Roses’ “Use Your Illusion” records.

Monroe knows this too, and he’s aware just what his legacy means to people. Refreshingly though, unlike many rock stars who “retire” their best loved songs, he’s more than happy to embrace that material. “You know what, I don’t get it at all,” he says. “Why wouldn’t you want to entertain the people who love your music. We’ll finish with “Dead, Jail Or Rock N Roll” probably, because I love the fact people love the records I made, if you don’t want to entertain then you are in the wrong job, man! Be grateful anyone liked them at all, don’t dismiss the public like that!”

That last trio of solo records have been – and there’s no other word for it – stunning. Starting with “Sensory Overdrive” including “Horns And Halos” and up to date with “Blackout States” this is not a man who is coasting and relying on past glories to sell tickets. He still, however, as the decency to seem genuinely pleased that MV likes the records and adds that he too is pleased with the way they’ve turned out: “Yeah, they’ve been really good. We’ve got a good groove going. There’s going to be a lot of new material in the set.”

It helps that recently he’s been able to call on a killer cast. Ginger Wildheart was all over “……Overdrive”album and there’s half of the New York Dolls about too, with Steve Conte and Sami Yaffa, and the man who’s name is on the records is quick to praise the contribution of them all: “We’ve been able to get a really good group of people, tremendously talented, great song writers, and it’s fantastic.”

In the press build up to the new album there’s a quote from Monroe saying that it’s a record for “anyone who wants to know what rock n roll used to be.” That seems a little too boastful to have come out of the mouth of the guy that’s talking now and he says: “I do think there’s an honesty and integrity about our music that people respond to, there’s a lot of bands out there that seem to be fake and sell out to sell records, that isn’t for me. I believe in this absolutely.”

Selling records is clearly an interesting concept these days, everyone knows that if its not Spotify and Apple Music then it’s illegal downloading that has seen taking the heart out of the old style music industry. The man himself is pretty sanguine about the whole thing: “Well there’s a couple of things here,” he laughs. “I never sold many records anyway, my audience has always been a live audience, but if you start thinking about this as a business or an industry, then you are doing it wrong. This is all about the moment.”

A couple of weeks later he gets to prove this is absolutely the case. He takes to the stage in Birmingham a little while after the co-headliners Hardcore Superstar have finished their set, and proceeds to do everything he said he would. Charging through about 20 songs in his 75 minutes and looking like you want a rock star to look right down to the leather cap, he is compelling throughout. It’s more than that, though. There’s still a feel that it could go either way. There’s nothing slick or corporate here. This is edgy and still unmistakably dangerous.

Not for nothing you suspect does the set begin with “’78” a song which contains the chorus “You can take the boy out of ’78, the style’s gonna change but the sentiment ain’t, you can’t take ’78 out of the boy.” You can dress it any way you want to dress it, but there’s a punk rocker here. Just ask the bouncer who tries to hold him as he stands on the monitors. Mid song Monroe tells him to stop this (rather more forcibly) and afterwards by way of an apology he runs over to him – Monroe you feel doesn’t stroll anywhere – and says: “Man it’s embarrassing. If I didn’t think I’d be up up there I wouldn’t be there, and if I fall, so what? It’ll be a great show.”

He returns to another theme from our interview onstage too. Thanking the audience for coming he adds: “Live music is all I got….” It shows.

By way of a goodbye he puts it rather more bluntly. Taking the name of one of his own songs, he says simply: “Rock like fuck everyone.”

Michael Monroe will be doing that for a lot longer yet, he’s fit enough after all.

Blackout States is out now