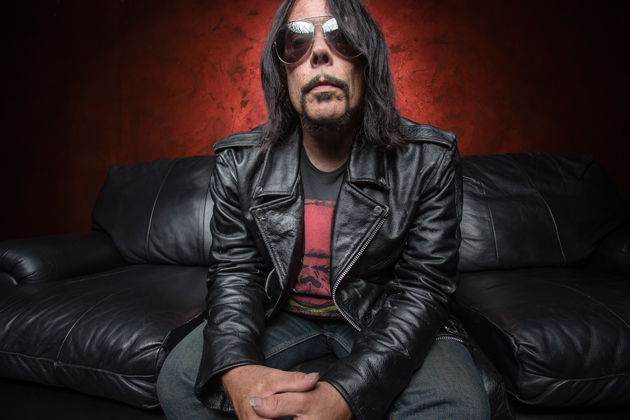 “Hey, Hey man this is Dave, what do you want to talk about?”

There is a temptation to exhale a huge sigh of relief at those very words, but let’s backtrack.

Not to let too much daylight in upon magic, but we are not sitting next to Dave Wyndorf chewing the fat, instead have been given a time to ring for the interview. But that’s where the problems began. We ring at the appointed hour, but the man who has navigated the good ship Monster Magnet through rock’s choppy waters for over two decades is a little distracted.

The first time we call he’s still talking to the person given the appointment before us: “the guy won’t shut up……” He says wearily. “Ring me in 10 minutes please.” Ten minutes later: “He’s still going on, sorry man. Can you ring back?”

Again not to deconstruct things too much, but we are having difficulty playing the hard-nosed scribe here. Rock journalists are supposed to view the world with the cool, indifferent insouciance of someone who does this shit all the time, but what’s wrong with admitting the truth that this is a genuine very. Big. Deal.

So it is with mounting trepidation that we go for third time lucky and then…. “Hey, hey man, this is Dave. What do you want to talk about?”

Jesus. Where do you start?

What we want to do is talk about the fact that the very second the chorus to “Powertrip” kicked in was the second that Monster Magnet became one of this writers favourite bands. Or we could talk about the first time we saw the band live back in the late 1990s and Wyndorf sat on a throne with flames surrounding him, in perhaps the most rock n roll thing this side of Motley Crue’s Tommy Lee playing a drum solo in a Ferris Wheel. We could do that, but in an effort to remain professional we offer up: “Press days, Dave. You must hate them?”

There’s that saying isn’t there. You should never meet your heroes. I mean, what exactly do you say if Dave is, well to be blunt, a dick. So, as the lamest of lame lead questions leaves the lips and hangs in the air, all those thoughts are running through the mind.

But happily, Wyndorf is nothing but a gentleman, with a deep, throaty New Jersey drawl he laughs: “Ahhh you know, I have done every kind of shit job there is to do, so you better believe I know how lucky I am to be able to take my music around this world and play it to people that love it.”

That hadn’t always been the case. It has been extremely well documented that Dave has had his problems with depression and drugs. Tales of hedonism and personal, private despair aren’t really what MVM has ever thought the world should be interested in, so had resolved not to ask about either of those things and instead concentrate on the music and the upcoming tour, but faced with an open door it would be remiss not to walk through, wouldn’t it? So we ask Dave if he’s in a good place right now: “You know what?” He replies quickly. “Life is great. The band is great, we have plenty of artistic freedom to do what we like and people are really connecting with the music – especially in Europe.”

Part of that artistic freedom included a hasty re-recording of 2013’s “Last Patrol” record. Emerging last year as “Milking The Stars,” with some different versions of the songs, and some new ones to go alongside. It couldn’t have been that the band had weren’t happy with the “…..Patrol” record. They’d played the thing in full on last year’s tour. Indeed, those looking for scandal can look somewhere else, because the reason for the record was just because Wyndorf thought it would “be fun. I was thinking to myself, what if? What if the songs were changed? We were off the road, we had the time, so I made the record. There is nothing more to it than that.”

So successful was this episode that it’s going to happen again. Apparently the “Four Way Diablo” album – which MM never play anything off live is a likely candidate for the treatment. Again, the truth as espoused by Wyndorf on this is far from the conventional wisdom. He disowned the record. He hates the record. All things screamed in the press at the time. Now though, he is happy for the real story to come out. “You know, all kinda of shit got said, but the reason we don’t play those songs is I wrote them in the wrong key. I can’t sing them live. It would be really cool to redo them so we could play them to people.”

Playing to people is something the band have been doing a lot more in Europe in recent years than ever they have before. According to Wyndorf this a plan: “we like going to where people like us. We are rock stars, ” he laughs. “We’ve got egos. We like people to watch and we like kicking their asses. Europe is great to us, we have fans out there. We try to get out in the late winter or early spring every year because not many bands are out then, and people are ready to rock.”

The European jaunt includes three British dates (“we’d like to do more, but there’s scheduling to think about”) and says the frontman we can look forward to a new set this time. “We are going to be doing a couple of things we haven’t done in a very, very long time. One of them I don’t think we’ve played ever. It’s going to be really cool.”

Monster Magnet have just won an awards or the best rock video of 2014 for the awesome “The Duke” single. We mention this to the singer. “Oh have we?!” He exclaims. “Wow, that’s cool. I didn’t know that. It’s a great clip. Director Phil Mucci and his team did a phenomenal job with it. It turned out great. I’m really happy it’s been recognised.”

And don’t dare make the mistake of thinking Wyndorf isn’t bothered by awards either. Quite the opposite. This is not the rock star who is too cool for school and doesn’t care: “The awards I really like are the ones voted for by fans. It’s amazing to make records that people like and want to listen to.”

When the tour ends there is the small matter of a new Monster Magnet album to negotiate. He’s unwilling to give too much away when we probe for his thoughts on it saying only: “I’ve got some ideas, we will jam with them and see how it goes. It’s too early to say what it’s going to sound like.”

And the man who is not far away from his seventh decade on this planet is looking even further ahead than that: “Album, another tour re-record another record then tour again. There’s a lot to do.”

But Dave, we say, didn’t you sing you were never gonna work another day in your life about 16 years ago? He thinks for a second and then fires back: “This ain’t work, I’m 58 years old and I’m still running away and joining the circus. How amazing is that?”

How amazing is that indeed.