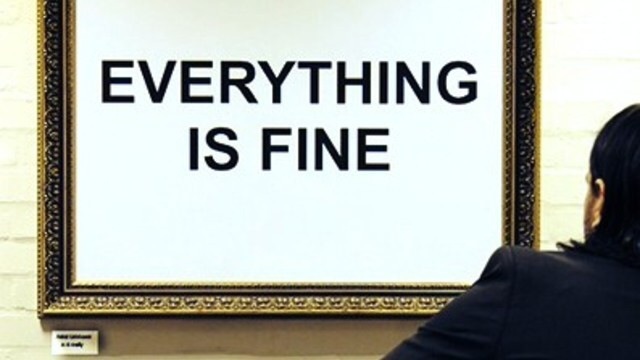 In the build up to this record, around the time it’s lead single “Die Trying” emerged, Hawk Eyes vocalist Paul Astick spoke of the tribulations he went through to make the record. On this very website he was quoted as saying: “I had severe writers’ block for the duration of this album.” Not good for a band who once released a record called “Ideas.”

Help was at hand in the most odd of places, according to Astick.”To get out of a hole, I went and put myself in one and went to Spurn Point on a really bleak evening. The sea and landscape tells you how to feel.” For those who don’t know Spurn Point is a bleak piece of coastline on England’s Eastern fringes, somewhere between Grimsby and Hull. At the risk of making a glib comment about the merits of Grimsby, it does seem that Astick was inspired by the surrounds, because there is darkness here.

Take the first two songs on “……Fine.” “The Trap” builds eerily, before morphing into some, what at this point in their career I guess we can call “trademark” Hawk Eyes angular riffing. This is Astick apparently laying his psychological state bare on its mournful chorus: “I have nothing left, I have nothing more,” he almost pleads. “The Ambassador” is faster, almost like a Northern English take on At The Drive In, and it’s absolutely clear that the trip to the coast more than blew away the cobwebs.

“Permission” musically echoes former touring partners Therapy? and the hook on “The Ballad Of Michael McGlue” doesn’t intend to let go, while “Terribly Quelled” takes them back somewhat to their days as ChickenHawk, when they opened for The Wildhearts and had a glorious piece of noise “I Hate This Do You Like It?” It’s opening line of “happiness is a risky business” seems to sum up the mood of the whole record.

A mighty strong collection all round with barely a dip, you do wonder why a band who can toss songs as good as the title track and “More Than A Million” would ever have been concerned about where they were going to find 12 cuts from. The depth in their songwriting is perhaps best shown by the nigh on seven and a half minute multi-layered closer “TFF.”

What evidently started as a bad experience for the band, ends with what might actually be a career high. Life can be a funny thing sometimes. Everything is fine? You betcha.