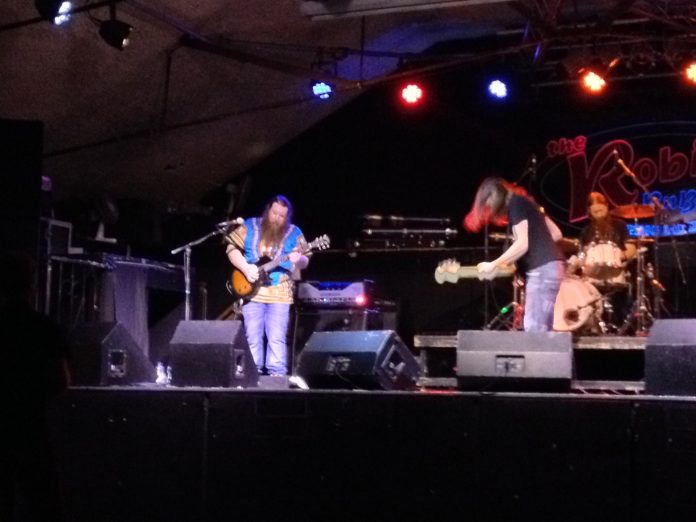 Dirty Blues with three of Ireland’s finest. Riding through the gates of hell with your pubic hair on fire is optional

Ali Clinton and his trio are another in the long line of hugely talented blues youngsters knocking around right now. This Leicester lot have got more than a dash of class about them “Got Me Crying” and “Second Time Around,” the latter with its Hendrix style groove, is quite outstanding. Clinton is prodigiously talented, playing in Uli Jon Roth’s band gives in a head start in the rock stakes, and backed by the rhythm duo of Owen Thomas and Will Ganner, this really is (yet another) band to watch. When they slow it down with a plaintive ballad, “Her Eyes” it has touches of Bonamassa circa “Sloe Gin” and is topped off with a wonderful solo, while closing number “Lost Me” starts slowly and builds to a fine climax. Lord knows where they keep finding these blues obsessed kids, but no matter. The future for this venerable old genre is bright and probably carrying a Les Paul.

“Hello everybody, we are Crow Black Chicken, we are from the Deep South….of Ireland” says singer/guitarist Christy O’Hanlon. The boys, it seems, are here on a mission, they did an acoustic session on TeamRock yesterday, before posting the message on Facebook that they “couldn’t wait to turn it up to 11 at The Robin.” Appropriate then, that this is loud.

Since forming in 2009 and evidently naming themselves after a Ry Cooder song, the lads have played hundreds of shows. Second album “Rumble Shake” is just out – and it’s rather marvellous. CBC look exactly like the sort of band that lives on the road. There’s three of em. Two of em have the type of beards only seen in Game Of Thrones, and only then North of the wall. Crow Black Chicken would get likened to ZZ Top even if they didn’t have the Southern Boogie Blues thing off pat.

What we come to learn over the course of their 90 minute set is not only are the trio outstanding blues players, but you couldn’t trust them to look after your cat and you can cook a fat Irishman in 45 degrees of New Orleans sunshine. Furthermore we find out that like Eddie Grant, the fellas rock down to Electric Avenue (where Christy purchased his….ahem distinctive… stage attire tonight to “blend in.”) We learn these things because O’Hanlon, as well as being a prodigious slide guitar merchant, is an outstanding storyteller.

Chicken play a number of songs from “…..Shake” but it turns out the boys aren’t happy with how one of them, “Jesse Mae” turned out (“it’s too striped back, Ger was only allowed to rub his face on the drums”) so they give it the full rocked up experience here. Claiming it is the “riding through the gates of hell with your pubic hair on fire” version, probably gives you some picture of the grimy, oily feel it has now.

You can’t imagine this three stripped back too often, so with pubes extinguished (we assume), it’s the turn of the heavy and dark “Hang Em High,” “……Shake’s” glorious opening track. “Snake Farm” slithers its way around, CBC are apparently adopting it as a national anthem as they like it so much (some of these stories may be true, it matters not.) towards the end they get funky with some fine bass work from Steven McGrath, hell they even get romantic on “Skin Deep” from debut album “Electric Soup” (although this is an odd type of romance given that they promise to “suck you dry like a desert, baby” at one point) but whatever they do, it’s superb.

However, if they were great before, then when they play “Sit With Satan” it goes up a notch. It’s anger made flesh, it’s passion in the raw, it’s a stone-cold magnificent song. And played live, it takes on a life of its own. As does the title track to the new record. Living up to its name, it rumbles along like Rory Gallagher playing Cream.

Whether they reckoned on an encore or not is not clear, but there is one and, built around a groove that could loosen your fillings, their version of Taj Mahal’s classic “John The Revelator” ensures the night is given a fitting conclusion.

Crow Black Chicken, then. A rare gem. Everything a blues trio should be from a country that knows a little about magnificent music. Delta blues Clonmel style – you know what? It might just be the best kind.