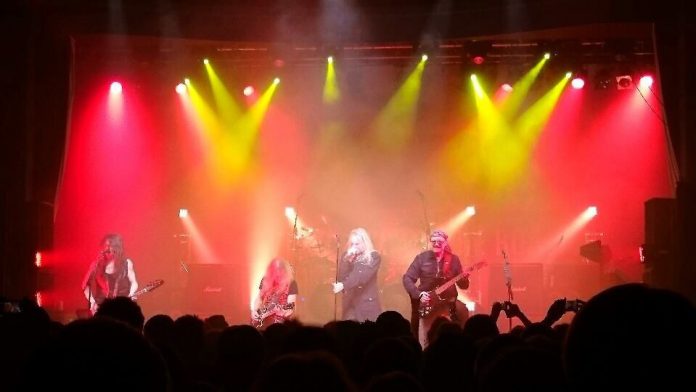 The word unique: Bandied about with abandon to describe any band that does anything remotely different. Well, sod it. We are going to have a go too. Because really, there is nothing quite like Hell. David Bower, stripped to the waist and wearing his crown of thorns, is so over the top you aren’t ever quite sure whether this is a serious metal gig or pantomime, but then there’s the music. Masterminded for decades by Tony Speakman, part Maiden, part Priest, totally wonderful. Songs like “Land Of The Living Dead” and “On Earth As It Is In Hell” are resolutely serious. This is glorious and it’s gloriously OTT. “Until we meet again,” says Bower, “May your minds be free and your souls be your own.” Amen to that.

In the half hour between bands you can tell a lot. First of all there’s the music that’s playing. It’s a veritable classic rock disco in here. Kansas, Free and Priest. The giant – and by giant we mean humongous – backdrop explains why. Saxon: Warriors of the road, it says. Then just before 9pm, the one and only “it’s A Long Way To The Top, If You Wanna Rock And Roll” blasts out….gentlemen start your engines.

It’s been 36 years since their first appearance in this venue. Then they played the Civic next door with Motörhead in 1979, as Saxon leader Biff Byford explains. And that’s what this tour is to celebrate. Of course, this should have happened just under two months ago, but the hospitalisation of drummer Nigel Glocker put paid to that. In his place behind the kit comes Sven Dirkschneider and if that name sounds familiar, it’s because he’s the son of German legend Udo, so it’s fair to say he knows classic heavy metal when he hears it.

Lucky then that for those 36 years classic metal is what Biff and his mates have dealt in. From the get-go of “Motorcycle Man” this is a celebration of everything that’s ever been good about British rock. And, in fairness to them, as much as must be tempting for them to concentrate solely on the back catalogue, they smash out the title track of their most recent record “Sacrifice” second song in, complete with some good old-fashioned smoke bombs and pyro.

The classics are all here, though, with more than half the set coming from those three records that every denim clad metal fan worth his salt knows. And in the context of the evening, “The Bands Played On” perhaps means a little more (before it’s airing Biff says Glocker will be back behind his kit soon) and if we may paraphrase a song title that is played just a little later, maybe they do really have to rock to stay alive.

This band have been a part of MV’s life for nearly 25 years. Fittingly they play the song that first got us hooked. “Solid Ball Of Rock,” released in 1990, still swaggers, it still grooves and it’s still stone-cold brilliant. They follow it up with the proto thrash of “20,000 Feet” and “Susie Hold On” which they haven’t played in ages, and in that trilogy alone show what’s so special about Saxon.

Speaking of great songs, all of a sudden there’s no power and no warning lights, and we are strangers in the night again. This track is anchored with some fine guitar work from Paul Quinn, who has been Biff’s right hand man for almost 40 years. The versatility of his playing is really shown on tracks like “Crusader.”

“Princess Of The Night” ends a slightly shorter set than usual (totally understandable given the drum situation) but there’s three they haven’t done and are almost duty bound to play, so it is they are back for “Wheels Of Steel,” “Strong Arm Of The Law” and what is surely their anthem, “Denim And Leather” which is arguably the best heavy metal song about heavy metal ever recorded.

Just as much part of the NWOBHM history as Judas Priest and Iron Maiden, sometimes overlooked, Saxon are in their own way just as vital. They haven’t pandered to trends, they haven’t bent at the knee to fads.That Wolverhampton is sold-out tonight – just as it always is when the band are around – tells you everything: they haven’t ever needed to. Warriors of the Road, indeed. And dare we suggest, close to being traditional metal’s foremost fighters.