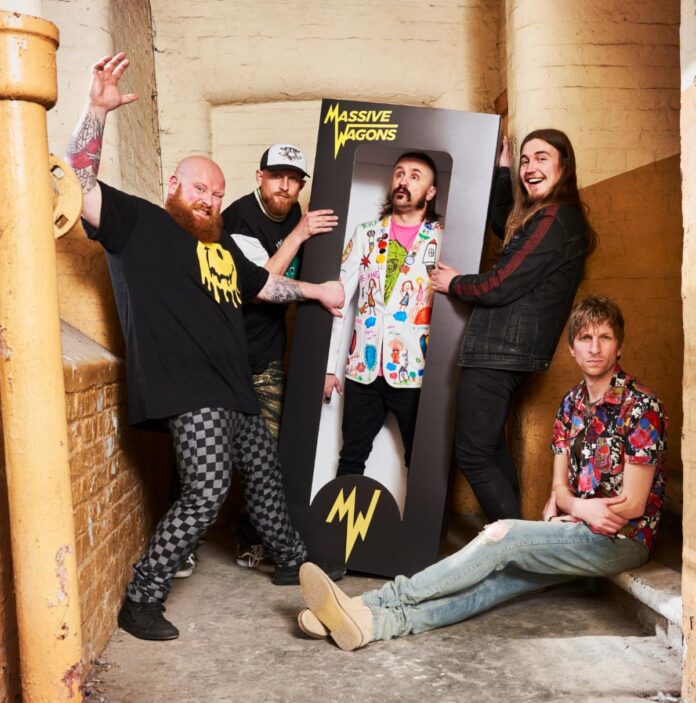 Following the recent release of their “Fuck The Haters” single and moved by fan stories in the aftermath, British rock n rollers MASSIVE WAGONS are launching a national anti-bullying campaign and inviting you to join them, and The Sophie Lancaster Foundation, to help stamp out all bullying, everywhere.

Written as a supportive rallying cry for those who have been affected by any form of bullying, “Fuck The Haters” is a bold-call-to-arms track that holds a potent middle finger to everyone and anyone who feels it necessary to bully other people, be that physically, face to face, or keyboard warriors in the social media sphere. The track’s accompanying video underlines this message, a no-holds-barred performance chock-full of the band’s trademark charisma as they stand up against incessant social media trolling and sinister anonymous figures.

Today, Massive Wagons are sharing the first in a short series of informative, personal interviews on their social media. The first episode features frontman Barry “Baz” Mills discussing the inspiration and some personal experiences behind the single and ensuing anti-bullying campaign with band mate Adam Thistlethwaite. You can watch it here or by clicking below.

The band are also donating a proportion of proceeds from all sales of a range of “Fuck The Haters” and more child-friendly “Forget The Haters” merchandise, including t-shirts, patches, foam hands, and a goodie pack to The Sophie Lancaster Foundation. You can order online here.

The Sophie Lancaster Foundation intends to use these proceeds to deliver S.O.P.H.I.E. workshops in schools which are designed to increase levels of empathy in young people and help them understand that actions have consequences. S.O.P.H.I.E. stands for Stamp Out Prejudice, Hate, and Intolerance Everywhere. Learn more about their important work and other ways you can support them here.

For a band renowned not just for their driving riffs but for their boisterous humour, this is a deeply personal campaign the group take very seriously, because of their own life experiences too.

Often seen as ebullient and unsquashable, frontman Barry “Baz” Mills shares, “I took a lot of crap at school, it seemed like my universe at the time revolved around being picked on, going to school and just coming home in one piece. I got it in the neck from kids and teachers all the time; I wasn’t the smartest lad and I was very, very small for my age – both things I believe contributed to the shit I got. This carried on all through school and college, not being from a big town I just became the target guy. Joining the RAF was the best thing I ever did. I moved away; new start, new faces. The military is like a brotherhood. It strips you back, makes you all the same, then just re-builds you. I just became a different human. When I eventually left and came home, the same old losers were living the same old lives but I wasn’t prepared to fall back into that trap. I hooked up with a few guys, we started the band and here we are…”

He may be the firecracker frontman of an internationally-recognised, chart-busting rock ‘n’ roll band now, but those experiences in his formative years played an important part, shaping the person he is today.

Baz continues, “Long story short, that abuse will never leave me – it crosses my mind at least once a day every day – but it didn’t beat me. I use that shit as a tool to be who I am now. It reminds me every day that I can do anything I want. It has taught me to be kind, sympathetic, and understanding with others. I never ever want to be the bully or abuser – fuck them, fuck them all. They aren’t in a rock band, working for themselves, doing something they love, touching people’s lives with words and music, taking my daughter to school and bringing her home, doing what I like when I like. I’ve done this, you can do this, don’t be beaten down, don’t let them win, live your life how you wanna live it FUCK THE HATERS.

It means a lot to be able to share this message through our music, and even more to be partnering with The Sophie Lancaster Foundation to help support the anti-bullying work they do in schools.”

Adam Lancaster, from The Sophie Lancaster Foundation states, “The message in this Massive Wagons song ‘wear what you want, be who you want to be, and be proud about it’ absolutely reflects the core message of The Sophie Lancaster Foundation. The unprovoked gang attack on Sophie was solely because of her Gothic appearance. Our work focuses on educating people that difference should be celebrated not feared and we all have the right to be who we are without harassment or violence. It’s great that this campaign has such a strong anti-bullying message as we know how devastating the effects of bullying can be. We are so grateful that the band will be donating a proportion of merchandise sales to the Foundation and we will use any proceeds to deliver much needed anti-bullying workshops in schools.”

How else can you help?

Use these hashtags on your social media, and if you feel able, share your own experiences: #FuckTheHaters #StopBullying

Watch and share these additional upcoming anti-bullying related interviews from Massive Wagons singer Baz, set to be posted on their social media thus:

Donate to The Sophie Lancaster Foundation and learn more about their work here.