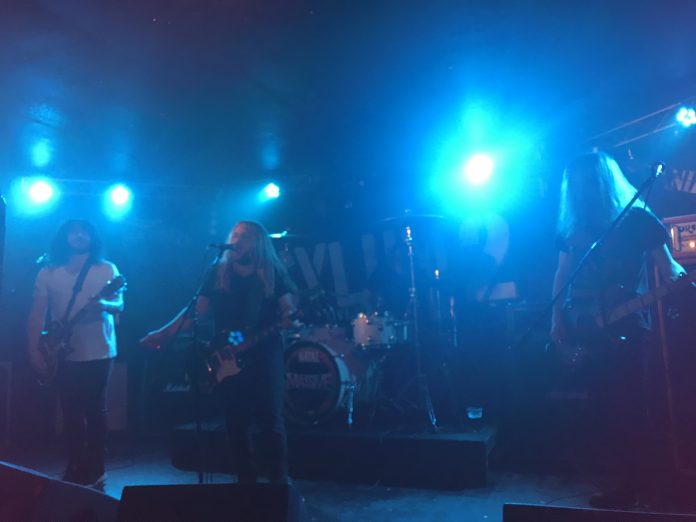 Massive are selling lanyards at the merch table tonight.

Each one of them gets you a signed copy of their forthcoming album – out on February 1st next year. As their diminutive singer -cum-force of nature Brad Marr puts it here: “each one of these is an album sale that will get us in the charts. Maybe after six years we’ll get some recognition…..”

Then he says something that should be actually tattooed somewhere on him so much part of him are these words: “or we could just play some rock n roll instead.”

Massive have been coming over here for nearly all those six years. They lived over here for a bit and bass player Gary is English, so is new drummer Andrew, and each time I’ve seen them, right from the time when they headlined the stupidly named Rock Zombie in Dudley to tonight, it is absolutely the truth to say that whilst there’s plenty of hard rock bands that sound like them, there ain’t one who means it more.

There is a glorious irony in their tongue in cheek tune here, “In It For The Money” because these boys are in it for anything but. They are in it because they can write songs as good as “Lacey” too, and they’ve always had the ability to pull a cracker out of the hat.

With the new album (reasonably) imminent, they do try out a couple of new ones. “Long Time Coming”, “Bullet” and “Generation Riot” are all examples of superior songwriting ability – and chucking “TNT” in there merely proves that they know where they came from – literally and in a musical sense.

“Dancefloor” from their debut record is big, dumb, stomping fun. “Highway Star” gives the original a sort of greasy makeover, and you can imagine them practicing this as kids. That innocence has never really left Massive either. Watch them tonight, watch them throwing empty beer cans at each other, pinch each other’s bottoms mid solo, make Gary hit water bottles using his bass as a cricket bat and you realise: these aren’t rock stars. This isn’t a slick show. And its all the better for it.

As if to prove that Massive aren’t your normal band, guitarist Brad has to go to the toilet mid set – bringing a whole new meaning to “One For The Road” – before they end with possibly their best known pair. The ever so slightly epic, but totally unhinged “Ghost” and the copper-bottomed slice of brilliance that is “One By One” (“the one that bring us all the money” Marr had joked earlier.)

That has to be the end because they’ve run over curfew. Not, actually out of any desire to rebel, just – you guess – because they were having so much fun and are slightly disorganised.

Previous article
IT’S A G*A*S*S
Next article
ARTIST OF THE DAY: BILLY BIO