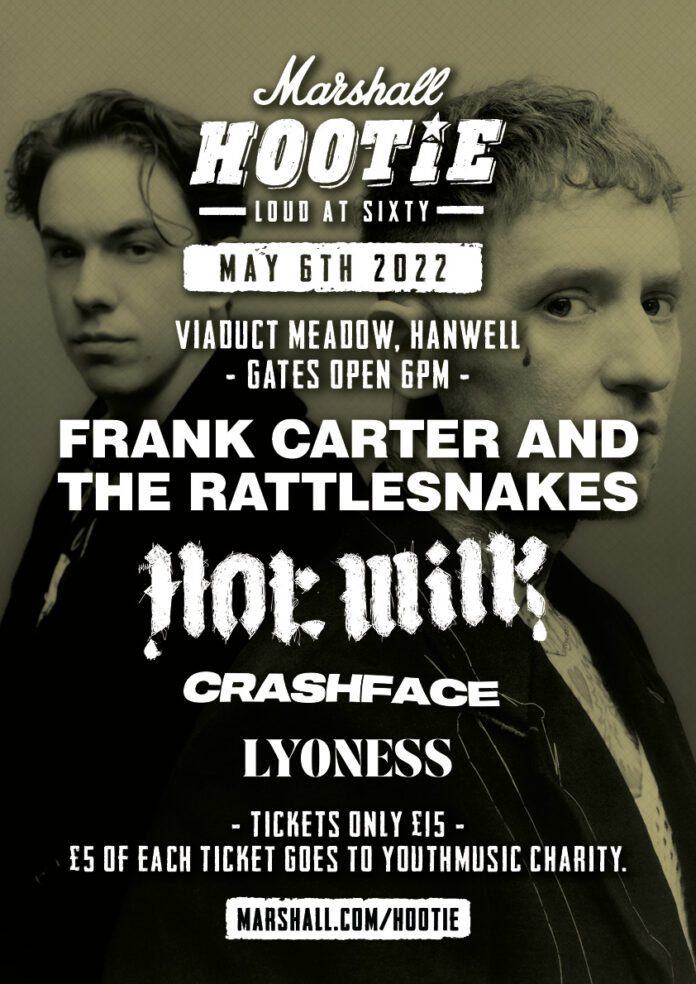 Today Marshall announce that joining headliners Frank Carter and the Rattlesnakes will be Hot Milk, Crashface and Lyoness to complete what is sure to be a truly stellar night celebrating the rich history of Marshall.
Pick up ticketsHERE
On Friday 6th of May Marshall will bring the world of Rock and Roll to Viaduct Meadow, Hanwell in honour of their 60th diamond jubilee in the form of Marshall Hootie – Loud At Sixty. The one-off festival will be headlined by Frank Carter and The Rattlesnakes and special guests to be announced.
The story of Marshall began in Hanwell, the birthplace of the first ever Marshall guitar amplifier and the original location of the Jim Marshall and Son store. Now, 60 years later Jim Marshall’s legacy as one of the most celebrated guitar amplifier manufacturers in the world lives on.
Forever wanting to give back to his community the MarshallHootie – Loud At Sixty is a special part of the annual Hanwell Hootie, which itself celebrates ten years in 2022. The Hanwell Hootie is an event that is incredibly close to Marshall’s heart and allows for talent of all ages to be given a platform where fans can experience and enjoy their music.
Tickets for Marshall Hootie: Loud At Sixty are priced at £15 including all fees and in support of Give A Gig week £5 from each ticket is donated to Youth Music. Tickets can be purchased here.
Regarding the Marshall Hootie Managing Director Jon Ellery states:
“60 years on from the first amp built for the next generation of artists, Marshall Amplification are celebrating their diamond jubilee in style with a headline performance from none other than Frank Carter and the Rattlesnakes.

With donations from proceeds going to Youth Music, the ongoing commitment from Marshall to honour Jim’s legacy will no doubt be as LOUD as ever.”