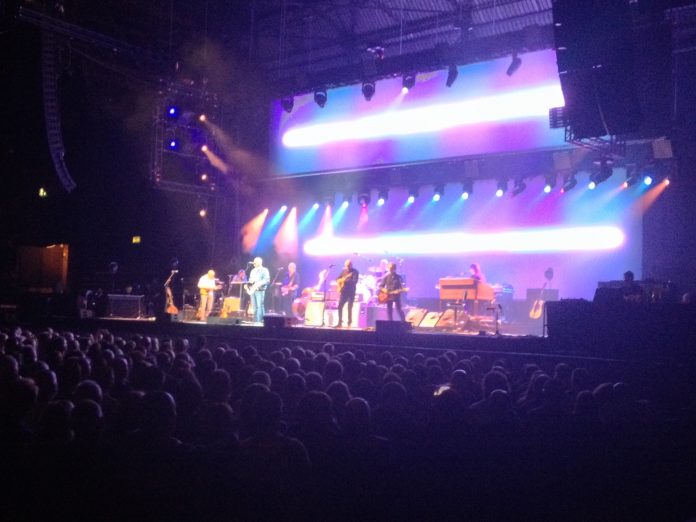 Was the Tracker tour on track in Birmingham, or was it in (ahem!) Dire Straits

At the end of the second song tonight – the quite brilliant “Corned Beef City” – the balding chap in the denim shirt and jeans strolls to the microphone. “How are you all?” He enquiries pleasantly. He could be a hopeful at any open mic night up and down the country. This bloke, however, actually is responsible for some of the most recognisable songs in British rock history. He is Mark Knopfler.

And he’s in town tonight, with about 10,000 people watching him by the way, to play a selection of songs from his solo career plus the odd one from that band you might remember. The one that wanted their money for nothing and chicks for free….

These days, though, the MTV hoopla and all those videos are behind him, and watching Knopfler and his outstanding band tonight you sense that no one is happier about that than him.

He’s just recently released another solo record, and “Tracker” like the rest of them, is a superior piece of work, it’s not quite blues, it’s not quite folk, it’s best to think of it as what it might sound like if Bob Dylan went Celtic and ate, as the aforementioned “….City” puts it, “bacon, egg and sausage, double chips and beans,” it is a very British work of songwriting.

There are five songs from it included here. “Broken Bones” and “Laughs And Jokes And Drinks And Smokes” have a kind of laid back feel, but it’s “Skydiver” and “Wherever I Go” – which appears in the encore – that really take the eye, featuring the superb vocal talents of Ruth Moody as they go about their business.

Other solo material isn’t neglected either, and “Privateering” is a lovely, lilting piece of folk, and “Postcards From Paraguay” is given centrepiece status as it allows the band introductions.

Of course, though, there’s a sprinkling of Dire Straits tunes. “Romeo And Juliet” is filled with emotion and “Sultans Of Swing” is stripped down, seeing the huge band onstage become just a four piece for a little while and “Telegraph Road” allows them all the chance to cut loose, Knopfler proving his worth as a brilliant guitar player.

The three song encore ends with “Going Home (The Theme From Local Hero)” and features the prodigious saxophone talents of Nigel Hitchcock.

There are many ways to do an arena rock show. You can go for bombast and a light show, like Kiss. Or you can strip back and almost ignore the fact there are thousands of people there and just do your thing. Tonight was one of the latter.

Throughout the two hour show tonight there is bunting occasionally falling from the ceiling. It’s a residue from the Take That gig earlier in the week. Knopfler surveys the paper as it swirls past his nose. He grins at the obvious differences between this and what he does: “What did you have here?” he asks. “Michael Bolton on ice or something…..? The message in this juxtaposition is perfectly clear. This is real honest music, brilliantly played, with a relaxed and warm feel.