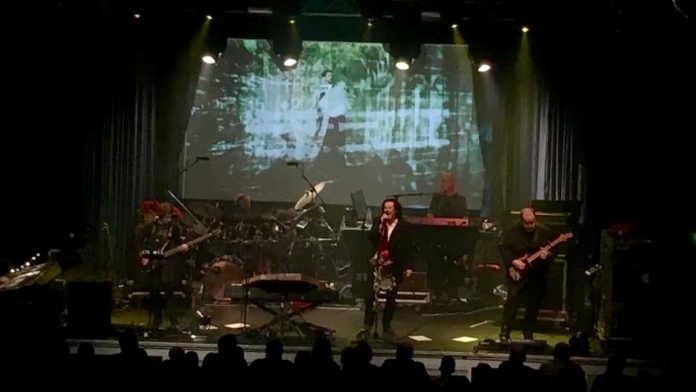 A trip to the wonderful Leamington Assembly is always worth making the hour long journey from Wolverhampton…..add into the mix that it’s a one off warm up gig from Marillion and it’s really not worth debating for longer than the micro milli-second it took for me to make the decision to attend.

This was always going to be a special event purely for the fact that it was going to be the first time we get to see the new material played live…..it’s been an amazing few weeks for the band with the new album F.E.A.R hitting the high numbers of the album charts across the world and particularly pleasing to see it near the top end of the U.K. Album charts.
This was a warm up to the US tour that starts in just over a weeks time which means it’s a good way to run through the technical gremlins that can crop up…..a sticking laptop during the intro music which needed rebooting or slapping which is my favoured method a couple of times was pretty much the only tech issue…..and we got that out of the way in the first few minutes.
The setlist tonight was a fine mix of old, not so old and brand spanking new…..I’m not going to give out running orders as that would be unfair to the American audience who may or may not get this exact show starting later this month…..a couple of personal stand out moments for me were ‘Sounds That Can’t Be Made’ which still gives me goosebumps each time I hear Steve Rothery warming up for that awesome guitar break at the back end of the track and the glorious ‘Man Of A Thousand Faces’ which just gets better and better each time I hear it.
The new material that was aired tonight was just majestic and instantly felt as if it had been in the setlist for years…..a quick scan around the crowd and you see the majority of the audience singing along to the new songs…..for many I imagine the album hadn’t left the turntable or CD player since its release.
My one worry was that the guitar strap attached to Steve Hogarth’s Rickenbacker resembled Donald Trump’s hair…..surely H and Trump don’t shop at the same store? Steve Hogarth was in fine form tonight and had a few amusing and correctly harsh words for a few of the world leaders and the wannabe world leaders……one guy in the crowd shouted out ‘Ian Mosley for President’……as it stands he would probably do a better job but we wouldn’t want to wish that upon him.
The encore brought around a strange set of events…..it was the first time I had seen a gig halted due to CPR being administered…..as the medical staff were attending to the unfortunate patron another on the other side of the hall required attention too…..it was a crazy 15 mins but all credit to the paramedics and security staff who from my view point on the balcony dealt with the situation admirably……and well done to the band who after a quiet word mid song from the Tour Manager halted proceedings to allow the house lights up and gave out a few words of explanation to the audience as to what was going on.
The band returned after a short delay to start the encore once again…..this time without incident thankfully and then that was it…..the first UK Marillion gig of 2016 with the new material….and I must say it went down a storm, it’s onwards to America for the band in a few days and then it’s back to the UK for a short tour which kicks off in Aylesbury on November 27th which I shall be attending……I love it when there’s plenty of Marillion stuff on my calendar!!!!
Garry Foster
Unchained: Tuesday’s 10pm-Midnight
Prog Rock Files: Thursday’s 10pm-Midnight
101.8WCR FM and online at www.wcrfm.com