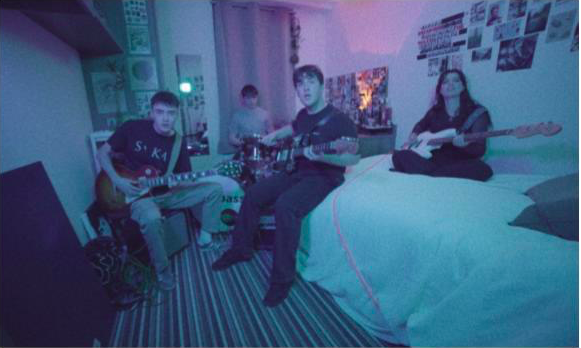 Rising indie/alt-rock quartet Overpass inspired a big reaction with their latest single and This Feeling Records debut ‘3AM’. The song picked up significant DSP support, with highlights including the cover of Hot New Bands plus New Music Friday UK, All New Rock, Rock Right Now and Proper Belters at Spotify as well as New in Alternative, New in Rock and The New Rock at Apple Music. Last weekend saw them make their live TV debut with a fiery performance on ‘Soccer AM’.

Now Overpass take another giant step forwards as they share their brand new video for ‘3AM’ and announce details of their biggest headline shows to date.

The ‘3AM’ video uses the song’s themes of coming-of-age innocence and excitement for a possible new romance as a launchpad for its narrative. A young couple head to a house party for their first date, where the course of true love runs less than smoothly, while Overpass power through a rehearsal in the bedroom. The couple work through their problems and the night ends on a high – although he learns the hard way that you really don’t want to interrupt an Overpass rehearsal session…

Overpass have also announced they will play their biggest headline show to date at The Mill in Birmingham on April 28th – a sizeable step up to their previous Birmingham headline show at the O2 Institute 2, which sold-out in less than two weeks with no support announced. The band have also confirmed a headline show in London at the Camden Assembly on April 26th. Tickets are available HERE for Birmingham and HERE for London.

Overpass commented, “The end of 2022 has been a whirlwind for us with the incredible reaction we’ve had to ‘3AM’, the headline show announcements and playing live on Soccer AM. We’ve got some more very exciting stuff on the way for the start of 2023 which we can’t wait to share.”

Consisting of Max Newbold (vocals/guitar), Elliot Rawlings (guitar), India Armstrong (bass) and Joe Gallagher (drums), Overpass will play their final gig of the year as guests at The Twang’s Birmingham O2 Academy show on December 17th. They then kick-start 2023 by co-headlining the Independent Venue Week Tour alongside Tom A.Smith.

Previous article
DAMN, DIXIE ARE HOT
Next article
INTO A SPIRAL