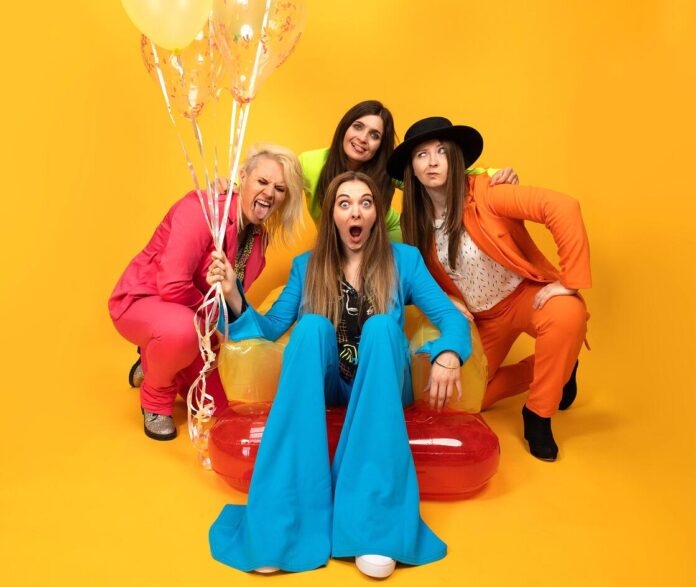 Queens of “colourful chaos” The Hot Damn! have been announced as special guests to bluegrass rockers Hayseed Dixie on 16 dates of their upcoming UK tour in February/March 2023.

Following a fantastic year for the feisty foursome, which has seen them wow audiences across the UK with their unique and energetic performances, they will be premiering new material from their upcoming album on their most extensive tour to date.

“It feels like forever ago that we were on the road, but we are super stoked to be sliding into some new territories this coming spring! The almighty HAYSEED DIXIE are absolute legends; they sure have got the party memo and they are taking us with them as part of their epic hoedown tour! What can I say? It’s a pairing party you won’t want to miss with your real life eyes! The girls and I literally cannot wait to be conquering some new towns and we hope to make a lot of new friends! See y’all down the front!”

The band are currently raising funds towards the recording of their much-anticipated debut album through a crowdfunding campaign. Fans can nab themselves exclusive goodies such as brand new merchandise, one-of-a-kind-memorabilia, and even join the band for an afternoon in the studio! They will be recording the album in January 2023 ready for release later in the year.

Formed from the ashes of The Amorettes and Tequila Mockingbyrd, The Hot Damn! burst on to the UK circuit in 2021 and have since been riding the airwaves of Planet Rock, Kerrang! and BBC Introducing thanks to catchy-as-anything singles ‘Dance Around’, ‘I Didn’t Like You Anyway’ and ‘Live Laugh Love’.

Latest single ‘Live Laugh Love’ is described by Louder Sound as “So bad for you it has to be good…” and landed a coveted Spotify Editorial ‘Rock Right Now’ playlist feature.

With their debut album and more shows announcing shortly, brace yourself for a lot more bodacious bedlam, coming soon!

Previous article
BRUIT UP
Next article
MAKE A PASS