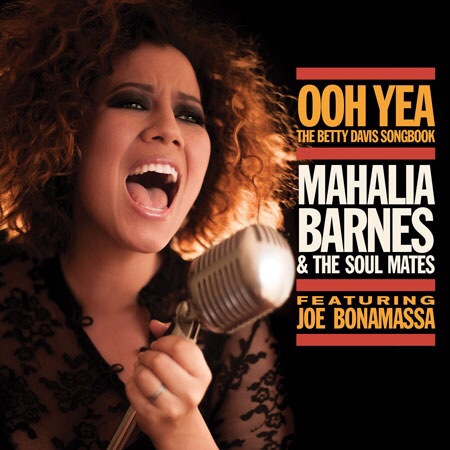 Q: What do you get if cross Jimmy Barnes’ daughter with some all-star guests including Joe Bonamassa. A. Some seriously sexy, funky blues.

On Joe Bonamassa’s 2009 tour-de-force “Ballad Of John Henry” there’s a Tina and Ike Turner cover, ” Funkier Than A Mosquito’s Tweeter,” that is a real funky, sassy little classic. You couldn’t help but wonder at the time what it would sound like if a woman sang the track.

Getting on for six years later, perhaps the best – and almost certainly the busiest – guitarist of his generation is lending his considerable talents to this, the new album from Mahalia Barnes, the daughter of Jimmy. Her own prodigious talents would have been perfect on that album track from the last decade.

Instead, she’s wrapping her larynx around this. A collection of tracks from Betty Davis. Davis is a soul/funk singer who married Miles Davis in the late ‘60s, influencing him with psychedelic rock, and introducing him to Jimi Hendrix. Later, she released three genre-busting albums, 1973’s self-titled debut, 1974’s They Say I’m Different and 1975’s Nasty Gal, that have been citied as an influence on Prince.

This 12 track showcase of Davis’ songs positively oozes with pure lust. Opener “If I’m In Luck I Just Might Get Picked Up” is dirty, raw, and downright sleazy, but with Barnes’ voice and Bonamassa’s playing, it just works in a superb way.

That, though, is merely foreplay, because Barnes is just getting down to business. On the likes of “Nasty Gal” and “Game Is My Middle Name” the sex is almost dripping out the speakers. And in the context of this record it’s safe to suggest that “You Won’t See Me In The Morning” isn’t about wanting cornflakes.

This is x rated, funky stuff, nowhere more so than “He Was A Big Freak,” which really should be the soundtrack to the 50 Shades Of Grey film, if it isn’t already, while the slap bass opening to “Anti Love Song” after which Barnes almost pants that she “could make you crawl” should be sold with protection. Things calm down a touch when the old man turns up for “Walking Up The Road” and is trademark Jimmy Barnes, on what is actually the most conventional blues song here.

It says much for this record that even the slow songs are slinky and sexy, “In The Meantime” would be a gorgeous ballad if it wasn’t about the singers need to get laid, and the closing “Shoo B Doop And Cop Him” sees her “doing it till the cows come home.”

“Ooh Yea” is a record that worms it’s way in. The playing is unbelievable, Bonamassa underlines his reputation for versatility here, with the rest if the carefully assembled cast not far behind, and Barnes’ voice is almost perfect. It could charm the birds from the trees and – frankly – the trousers off most men, which is kinda the point you suspect, and with the production skills of Kevin Shirley here, it just sounds huge.

Evidently a labour of (making) love for all concerned, this is a gem. “Oh Yea” is nothing more than the bluesy funk equivalent of an aphrodisiac.