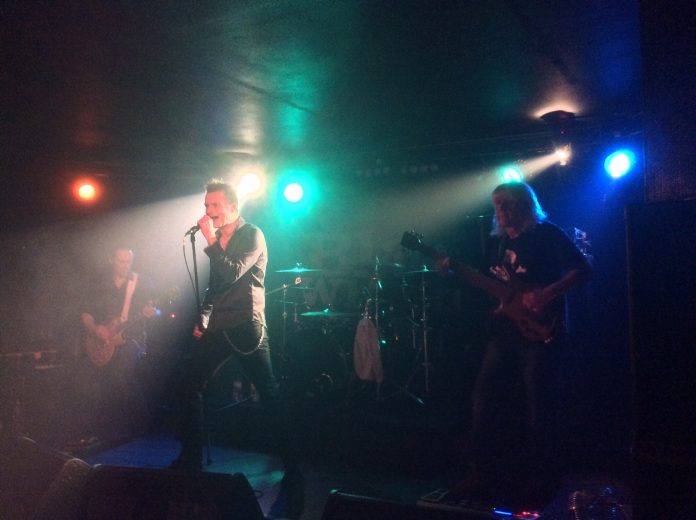 When the last song tonight sees frontman Kyle duck-walking up the Asylum and bass player Paul playing from on a table, it’s safe to conclude they’ve had a good night. But then, Theia don’t have bad ones. We’ve written about them so often in these pages that the three probably think we are stalking them. But there’s a reason we keep coming back to watch – and in case you’ve missed it, they are a bit blinking good. They rock, they roll, they crunch, and when we are really lucky, as on “We’re Alive” they do it all in the same song. As ever, they end it with a bluesy boogie of “Whoop-De-Fucking-Do,” a song which takes to task the X Factor generation for wanting to be fame without working for it. The irony isn’t lost given that this is a band who played in Carlisle last week. We’ve said it before and Christ, we will say it again, but here is three young men who have all the talent to succeed, and when (note the word – not if) they are famous, they can be damn sure they’ve done it the right way.

It’s fair to say that Vicious Nature are of a slightly older vintage than what has gone before, they also come at things from a heavier standpoint. Opening with the thunderous “Salvation,” VN definitely mean business, and when the opening chord of “Killing Me Like A Gun To The Head” hits it could do some serious damage. That these boys have been in Marshall Law, Cloven Hoof and Cerebral Fix probably explains why they sound so tight, while there is a real groove to recent stuff like “Dragging Us Under.” Although this is a sound that’s clearly rooted in heavy metal, Vicious Nature are far from the Maiden/Priest rehash that many bands seem to be, indeed there is a real modern tinge to “System Of Disorder” and “Breathless” which few can match. Best of the bunch, though is “Dream Stealer,” which is just a wall of sound tonight. They end with the menacing slam of “Fight For Your Life,” and it’s very much job done for Vicious Nature. A band who seem to be getting better and better.

Surrey’s Black Whiskey are another band made up of members who have – shall we say – notably singer Simon Gordon was in UK thrashers Xentrix while other members were in all sorts of disparate fields. That being the case you could be forgiven for thinking that this particular brand of bourbon might taste like. Well, “All Seeing Eye” boasts a big ol’ hook, and “The Devil Rides” makes good on Gordon’s promise to “groove like a bastard’ so ladies and gents, we can conclude that this is classic rock writ large.

Elsewhere Black Whiskey posses songs built on huge bass hooks, and in the case of “Hungry For Bullets” (let’s be honest here it’s dirty lilt doesn’t appear to actually be about Messrs Smith and Wesson and their hardware at all) admirable swagger. “Save My Life” does it’s best latter day Deep Purple impression and “The Coming Storm” is as close as this evening gets to balladic.

Appropriately for a song called “The Heavy Train,” the title track of their just-released record rolls along, doing so with stops at stations marked “Bad Company” and “Free” along it’s journey, it is perhaps their best moment, although “Tie It Down” – which comes on not unlike a British Aerosmith – isn’t far behind.

There does seem, right now, to be a classic rock revival in full swing. Black Whiskey are another name to add the ever-growing list of bands who play a superior version of 70s influenced rock n roll. They are a heady brew indeed. Tonight was the 100% proof.