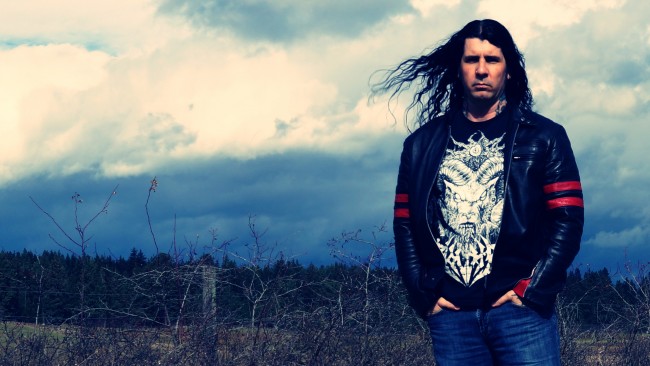 One man death metal beast gets his cleaver ready

After a few months in his home studio in Armstrong, BC, Chris Shaver has produced the debut full-length VHOD album, ‘Dreamcleaver’.  Chris mans the helm alone, performing all the instruments and vocals and this album showcases snippets of unused  material spanning many years as well asbrand new material.  The release is a fair representation of VHOD’s experimental death metal angle and will cement a milestone for Chris in his quarter-of-a-century musical journey thus far.

VHOD was conceived in January 2014 and is a merger of Godcursed (2004-2014), Morbid Darkness (1989-2014) and Worms Of The Birth (2011-2014), which were all active projects of sole member Chris Shaver at the time.  Early VHOD releases exhibited sporadic styles and were mostly instrumental pieces used as a basis for finding a more focussed signature sound.  Said releases consist of 3 singles, ‘The Scornful Winter’, ‘One Fallen’ & ‘Cimmeria’ and an EP, ‘Dreams Of 11.14’, respectively, all released independently.  In December of 2014, work began on the ‘Tor’ Series, which consists of 4 parts: ‘Behind The Shroud Of Mist’, ‘Wrap Three Times’, ‘Portal’ and ‘The Desolates’, respectively.  In these independent releases an evident foundation was made with which future VHOD recordings will branch out from.  Dreamcleaver is set for release November 13th 2015 on Finnish label INVERSE RECORDS.
Line-Up:
Chris Shaver (All Instruments, Vocals, Compositions)
More info:
Official Website: http://vhod.ca/
Facebook: https://www.facebook.com/VHODofficial
Twitter: https://twitter.com/VHODWERK