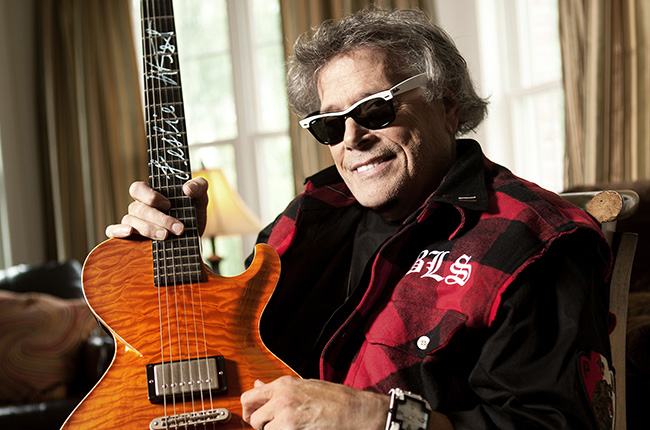 And the stars tell you all about it

‘Soundcheck’ is the sixteenth solo album by legendary rock guitarist Leslie West which sees him lay down some of his most inspired musical magic to date with the assistance of true rock royalty: the renown British guitarists Peter Frampton and Brian May, ex-Jeff Beck keyboard virtuoso Max Middleton, vocalist extraordinaire Bonnie Bramlett and the late great Cream bassist and longtime friend of Leslie’s, Jack Bruce  and is co-produced and engineered by West’s collaborator Mike “Metal” Goldberg,.

As a soloist, Leslie always displays a solid melodic sense combined with an effortless but equally aggressive rhythmic drive. He leans into the beat using a heavy fret- and pick-hand attack, and along with his heavily distorted guitar tone, generates tremendous power in all of his solos.  A great example of this approach is heard on ‘Here For the Party’. “When I’m playing a guitar solo, I’m listening for a ‘song within a song,’” Leslie explains. “Some guys will take a solo and it may be technically amazing, but I’ll think, ‘What does this have to do with the song?’ And I defy anyone to sing back to me the melody of a solo like that! I can’t really play that fast, and I like the solo to be like a little ride that takes you away to another place, and then brings you back. That’s what I look for in a solo.”

And then there’s that legendary vibrato. “The guitar should sound like a voice, and having a good vibrato is essential to me,” Leslie states. “When a first-chair violinist in an orchestra stands up to take a solo, I listen specifically for the vibrato. [Consummate classical violinist] Itzhak Perlman has a fantastic vibrato! That’s what I try to emulate. I worked so hard on getting my vibrato to sound the way I wanted it to. I still work on it, to this day. I don’t work on playing fast, but I sure work on the tone, and I sure work on the vibrato.”

‘Going Down’, features guest appearances from Queen guitarist Brian May, along with contributions from Bonnie Bramlett and Max Middleton along with legendary session players David Hood on bass and Bobby Whitlock on organ. “We did that track about 10, 11 years ago,” Leslie details, “and we had Max reprise his amazing intro from the version he’d done with Jeff Beck on The Jeff Beck Group album. I play the first guitar solo [up to 2:48] and Brian May plays from there on out. And vocal harmonizing with Bonnie was fantastic. Everything in the track came together and worked out really well.”

Another inspired track is the very unusual minor-key rendition of ‘You Are My Sunshine’. “First of all, I’ve got Peter Frampton playing guitar with me on this one. I watch the television show, Sons of Anarchy, and during one episode, a minor-key version of this song was playing in the background. I thought, Whoa…that sounds so different! I recorded it and sent it to Peter, and we trade solos and then play harmony lines together at the end. Also, I’m playing slide while he’s playing conventionally. His tone is phenomenal on this, with a warm sound and a really nice vibrato, and he loved the arrangement. To take a song you’ve heard all of your life and change it around like this is very cool.”

‘Soundcheck’ also includes a cover of the Tracy Chapman hit, ‘Give Me Just One Reason’, “I wanted to cover a blues song on this record,” says Leslie, “and I liked the tune and wanted to try to do something with it. I like the words, and the groove of the track is a great one to solo over.”  Whereas the solo acoustic virtuoso piece, ‘A Stern Warning’, demonstrates Leslie’s ability to move seamlessly between blues and classical influences; the track also has a connotation that is unexpected. “It’s a reference to Howard Stern,”Leslie reveals. “He called me one day to ask what the meaning was behind the Mountain song, ‘To My Friend.’ I said, ‘It’s about Felix—he gave me a 12-string guitar to play and record a solo piece with.’ So I thought it would be cool to do a new track in a similar way as a tribute to Howard, who has always been a great friend, and this is it.”

In putting the songs together for this record, Leslie also chose to cover the Curtis Mayfield soul classic, ‘People Get Ready’. “I’ve been playing this song onstage for a long time, slow and quiet, and then I build up the volume and use the volume knob to create violin-like swells. I love the way my bass player Rev [Jones] plays it with me, so I wanted to get it on the album. Incredible words. Also, Jeff Beck had done such a great version of the song, so I took the opportunity to play some different melodies over the chord progression. The song is dedicated Bobby Pace, who was one of my closest friends from way back who had recently passed. He was the first road manager for my first band, The Vagrants, and he was just a great guy.”

Closing out the album is a treasure for all longtime fans of Leslie West: a live version of Willie Dixon’s, ‘Spoonful’, recorded with Jack Bruce on bass and vocals and Joe Franco on drums, played in the classic Cream style as captured on 1968’s Wheels of Fire. “Back in 1988, I recorded an album called, Theme, which featured Jack on bass. We recorded at Millbrook in upstate New York, and the owner of The Chance in Poughkeepsie called and asked if we wanted to come over and do a set there, with no advertising, no nothing. Jack was into it, and the engineer at Millbrook, Paul Orofino, came with us and recorded the gig with a small portable stereo machine.  After hearing of Jack’s passing, we edited it down from its original length and decided it would be great to include on the record. As you can hear, I was trying to reincarnate myself into Eric Clapton! The first time I listened to Jack’s voice and the tone of his bass on the recording, I had tears in my eyes. I loved Jack so much.”

Two more great tracks complete the album: ‘Empty Promises/Nothing Sacred’, which Leslie refers to as, “My tribute to AC/DC!,” is another tune in an unusual “modal” tuning that omits thirds. “On my tombstone, it should read, ‘Leslie West: It’s Neither Major Nor Minor,’” Leslie says with a laugh. There’s also a cover of the Ben E. King classic, ‘Stand By Me.’. Leslie wanted to commemorate King, who had just recently passed on April 30, 2015. “Ben E. lived in Teaneck, NJ, not far from me, and I’ve always loved the words to this song.”

For Martin Barre, meeting Leslie in 1970 served to inspire the writing and playing on Jethro Tull’s most successful album in the band’s history, ‘Aqualung’. “Prior to going into the studio to record [1971’s] Aqualung, I met Leslie, whose playing I absolutely loved,” Barre reveals. “Leslie is well known for his association with Les Paul Juniors, and just after meeting him, I picked up a 1958 Junior because his sound was so incredible. I would say that he’s the only guitarist who has ever influenced me directly.”

Leslie was also influential in the development of the music for The Who’s masterpiece, ‘Who’s Next’. In early 1971, he was invited to record with The Who for the band’s initial NYC Record Plant sessions for the album, which sparked a close friendship with The Who’s leader, Pete Townshend. Says Pete, “Leslie gave me a really great Les Paul Junior with one pickup on it for me to use on Who’s Next, and Eric Clapton gave me an old Strat. They both gave me really good instruments and I still have those instruments today. Along with my Gretsch Chet Atkins, those three guitars were the only ones I used on Who’s Next.”

Another fan of Leslie’s was none other than Jimi Hendrix, with whom Leslie jammed at famed NYC clubs like Ungano’s and elsewhere. “I first met Jimi while I was recording Climbing! at the Record Plant and he was in another room mixing Band of Gypsys,” Leslie recalls. “Jimi came in and after hearing the first track, ‘Never in My Life’ he looked over at me and said, ‘That’s a great riff, man.’ I started shaking! There’s a great picture of us playing together at Ungano’s, and Jimi’s playing Felix [Pappalardi’s] bass. Getting to know and play with Hendrix is one of my greatest life experiences.”

Leslie is looking to close out 2015 and kick off 2016 with major touring in the states and in Europe.