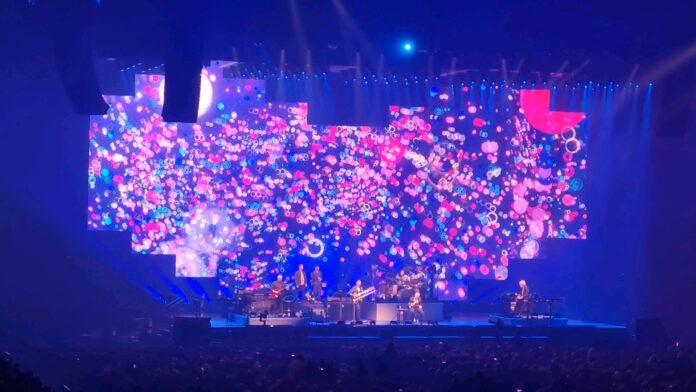 Firstly let me deal with the elephant in the Genesis room.  It gives me great pleasure to advise that the demise of Philip David Charles Collins has been greatly exaggerated.  Whilst it is fair to say that physically he has been in much finer fettle, but then spinal injuries and other health conditions will do that to you, the fears of some fans that he would be wheeled out in a chair like some old decrepit shadow of himself and then painfully warble his way through a Genesis greatest hits set.  None of this is accurate on last night’s performance.  Yes, as he has done on more recent solo shows, he sits down for the entirety of the show, using a walking stick to assist him on and off the stage.  Obviously this is not what fans want to see and I don’t suppose Phil wishes it either but thanks to some outstanding video and set design work it is not anywhere near the distraction or issue that you think it would be.  Vocally he is on fine form, with only the occasional noticeable struggle, and is backed by the voices of Patrick Smyth and Daniel Pearce which helps amplify the vocals and gives Phil some support.

All that said then what about the music?  As you would expect it is astonishingly magnificent.  Alongside messrs Rutherford, Banks & Collins there is longtime live cohort Daryl Stuermer and Phil’s talented son Nic on drums.  Phil’s health means that he has passed the baton, or drumsticks over to his uber-talented son, and although it is clearly a shame not to see Phil behind the kit once the gig starts you would not know the difference.  The drumming apple has not fallen from the tree.

A roar greets the dimming of the lights.  A roar that is reserved for only an elite few bands and artists.  This is no teenage scream that welcomes the latest popstar off the conveyor belt.  This is a throaty roar of music lovers who have spent many, many years waiting for the return of their heroes.  The band open up with the instrumental duo “Behind The Lines” & “Duke’s End” which sets up a stunning version of “Turn It On Again”.  It is a mighty fine start to a 2hr plus set that will remind all in attendance that they ae in the presence of greatness, potentially for the final time.

The quality just keeps on coming but not necessarily how you might expect.  For the following 30 minutes or so the band reveal in great performances of “Mama”, “Land of Confusion” and a stunningly atmospheric “Home By The Sea” illuminated by the video screens.  The first surprise of the evening comes in the form of a three-track acoustic set which sees the rest of the band join Phil in taking a seat and running through a triple whammy of “That’s All”, for the first time since 1998, “The Lamb Lies Down on Broadway”, also not heard live since 1998 and the first real signs of Phil’s vocal limitations and to finish off a beautiful version of “Follow You Follow Me”.

The next surprise comes straight after the intimate acoustic mini-set with a live rendition of “Duchess” which has not been played since 1981!!  If that was not enough the band then ramp up the energy for the final sprint and knock out classic hit after classic hit.  From “No Son of Mine to Invisible Touch” there is a raging torrent of awesome Genesis material that cements their status as one of the greatest bands of all time.

After two hours of some of the best music ever written it is left to the final trio of “I Can’t Dance”, “Dancing with the Moonlit Knight” and “The Carpet Crawlers” to send the prog masses home happy.  And happy they most certainly are.  Whilst those who decided, foolishly in my opinion, to give this tour a miss are harking back to the glory days the fans in attendance last night are living in the now and enjoying Genesis 2021 for everything it’s worth.