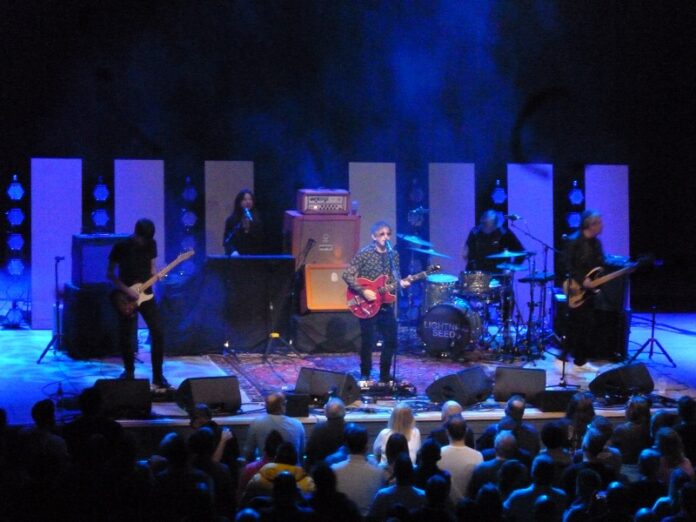 It must be over a decade since I last saw Damon Gough otherwise known as Badly Drawn Boy. The singer walks on stage tonight and shares a fairly upbeat forty five minutes of numbers drawn from throughout his extensive back catalogue. We have numbers such as `This Is That New Song`, `Something to Talk About` and the wonderful `All Possibilities`. Damon is in a much more content place these days as he has a debate with some Argentinian guy in the audience about whether he`s a better comedian than a musician. The singer gave up alcohol seven years ago and shares that he now has a further two children, which seems to be a positive outcome as a result of his improved lifestyle choice.

He plays `A Minor Incident` from the About a Boy film soundtrack and `Born in the U.K.` before the home straight concludes with a favourite of mine `You Were Right`, the captivatingly dreamy `Once Around the Block` and the reflective `Silent Sigh`. The final number is shared from behind a piano and may have been `Fly On The Wall` from the last album `Banana Skin Shoes` released with little fuss over two years ago. There`s a real vulnerability as the song is shared as it`s the first time he`s played this number live. It was heartening to see this underappreciated singer songwriter back and doing what he does so well. I can only hope that these shows with Lightening Seeds inspires him to undertake some more of his own real soon. Welcome back Damon.

Again it`s been years since I last saw Ian Brodie and his band Lightening Seeds. Maybe at the Reading festival, who knows. The band released an album recently, their first for thirteen years `See You In The Stars` and begin tonight`s show with the upbeat and inspirational `Sunshine` from said release. The singer , to me, is the master of creating catchy, hummable Indie pop rock tunes and demonstrates this with the breezy `Ready or Not`, infectious `Change`, reflective `All I Want`, `Lucky You` and `Perfect` which I always feel has a kind of Beatles vibe.

We return to the new release with the rolling folky `Great To Be Alive` and the title track `See You In The Stars`. A track I really love `Sense` gets an airing while a further couple of new cuts with the dreamy `Losing You` and single `Emily Smiles` blast out. There`s a couple of cover numbers with a trippy version of the Byrds sixties classic `You Showed Me` which included a snippet of `All You Need Is Love` and Wreckless Eric`s late seventies hit ` Whole Wide World`. The oddly titled `Sugar Coated Iceberg` is offered before the show ends with probably the most recognised Seed`s tracks with the almost perfect `Pure` and the wonderfully emotive `The Life of Riley` which was inspired by the singer`s son , who stands alongside him playing guitar tonight.

After some encouragement, the band who include Martyn Campbell on bass, Abi Harding on keyboards, Jim Sharrock on drums and Riley Broudie on guitar return for a two song encore that includes the enthralling `Marvellous` and the inevitable `Three Lions` with the FIFA World Cup just a week away. Although it was a pretty dark and blustery winter`s evening outside, Ian Brodie and his troupe brought ninety minutes of joyful sunshine to England`s second city. If there is a band that can always raise people`s spirits in a time of despondency, it`s Lightning Seeds and their uplifting and impassioned brand of blissful indie pop rock. Long may they continue.