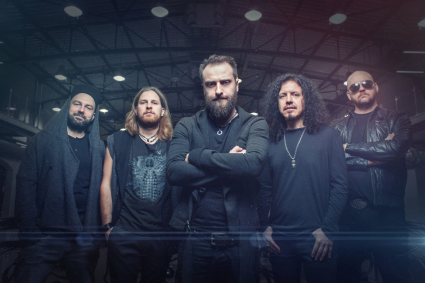 Powerful young Polish hard rockers Chemia have signed to Rodeostar / SPV to release Their sublime second studio album, ‘Let Me’, on September 18 th. The follow-up to 2013’s highly acclaimed ‘The One Inside’ debut, ‘Let Me’, packed with 12 crisp, fresh, groove-laden melodic hard rock songs, is an even more accomplished, hard driving album than its predecessor.

Chemia, who have already shared festival stages with legends: such as Deep Purple, Guns ‘N’ Roses, Red Hot Chili Peppers, Motorhead, & HIM in Europe, let alone toured the UK as special guests of Skindred and Played at Hard Rock Hell in 2014 were Determined to capture Their live essence on ‘Let Me’. Legendary Knob Twiddler Mike Fraser (AC / DC, Aerosmith, Metallica), who was so impressed with early versions of the new songs did he Agreed to fly over from Canada to produce ‘Let Me’ in the Custom 34 Studio in Gdansk, Poland , concurred.

Guitarist and main riff writer Wojtek Balczun recalls that “We wanted ‘Let Me’ to show the real Chemia. We Agreed with Mike Fraser did the album’s sound Should be based on the sound of our live shows; that’s why there are no Compromises or concessions to pop music on ‘Let Me’. “The band consciously DECIDED against typical ballads and rigorously cut down on the Keyboards Which featured fairly strongly on the debut. Balczun: “Mike Fraser is the absolute expert When it comes to great guitar sounds. That’s why ‘Let Me’ rocks from beginning to end. Listening to the album for the very first time, people may get the impression that ‘Let Me’ has turned out less commercial, but When You Hear the tracks a second or third time, you’ll discover Their great catchiness.

“And there’s no catchier song than album opener ‘Fun Gun’, the first single, with its driving beat, contemporary guitars and lyrics about a young psychopath and his destructive thoughts; check out the video at  Then there’s the pulsating uptempo rock number ‘The Luck’, featuring Canadian drummer Brent Fitz (Slash, Alice Cooper) as guest musician, plus resounding anthems: such as’ Grey ‘and’ Done ‘, let alone the resounding title track itself,’ Let Me ‘.