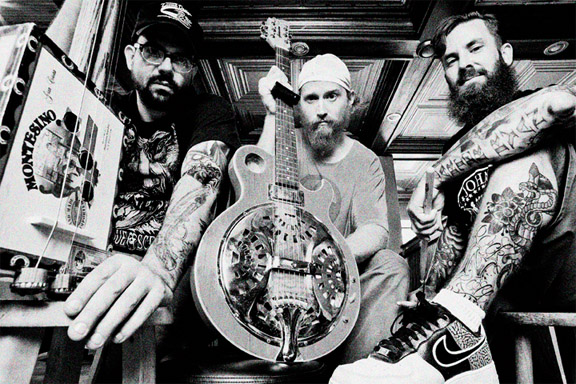 New album out next month
After nearly a decade of delivering their own high-octane, scuzzed-up take on North Mississippi rural blues as a duo, Left Lane Cruiser have recently expanded into a threesome for their latest studio album, Dirty Spliff Blues (their fifth for Alive Naturalsound Records).
Led by founding member Freddy J IV (aka Joe Evans) on vocals and slide guitar, and now joined by Joe Bent on bass and skateboard slide guitar (yes, he uses his skateboard as an instrument) and Pete Dio on drums & assorted other junk, this three-headed hydra, birthed in either Fort Wayne, IN or Hades depending on who you ask, still whips up the same frenzied mess of trashed-out punk/blues that LLC is known for. But on Dirty Spliff Blues there’s a decidedly more rock ‘n’ roll approach to their mean-ass blues. Songs such as “Tangled Up In Bush” or ” Skateboard Blues” still slink like snakes in the grass, but tracks such as the pile-driving opener “Tres Borrachos,” “Cutting Trees,” “She Don’t Care” and “Dirty Spliff Blues” rock with a newfound intensity, and that’s saying a lot for a band long known for both their intense, sweat-soaked live shows and in-the-red recordings. Of course, LLC’s very backbone – the Blues – is also evident throughout, from the hip-shakin’ groove of “Elephant Stomp” to, well, really just about every damn song on the record.
Any way you roll it – from the new cover art created by renowned artist William Stout to the THC-laced sh*t-kickers – Dirty Spliff Blues smokes like no other Left Lane Cruiser album before it.
Along with their music being featured in the hit television series Breaking Bad and receiving critical acclaim across the globe, Left Lane Cruiser have also toured relentlessly over the years, sharing the stage with artists such as Robert Belfour, T Model Ford, Lee Bains III & The Glory Fires, Bob Log III and many others, and are also regular performers at the Deep Blues Festival now held annually in the cradle of the blues, Clarksdale, MS.
Left Lane Cruiser’s Dirty Spliff Blues will be released on limited vinyl, CD and digital formats on June 16th via Alive Naturalsound Records. Tour dates to be announced soon!
DIRTY SPLIFF BLUES TRACK LISTING:
01 Tres Borrachos
02 Elephant Stomp
03 Whitebread n’ Beans
04 Tangled Up in Bush
05 Heavy Honey
06 Dirty Spliff Blues
07 Cutting Trees
08 All Damn Day
09 Skateboard Blues
10 She Don’t Care