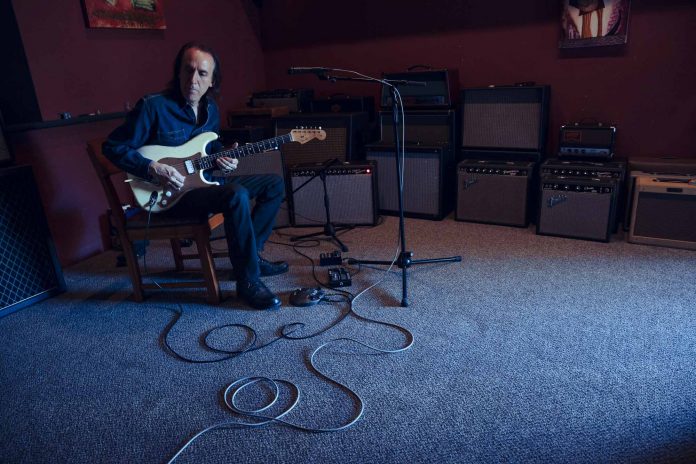 Rock Bottom sounds like it left the Morrison Hotel in 1970, got lost in Laurel Canyon, and finally found its way out onto Ventura Boulevard in 2017.

It suggests Joni Mitchell’s heady brew of imagery laden words and mystical melodies as easily as it evokes Hendrix, Arthur Lee and Love’s Forever Changes, and Buffalo Springfield. It is, however, above all, an album with a singular voice of its own. Have you ever been experienced? Well, this album will get you where you’re going.

Michael Landau on the song One Tear Away: “I was very happy to reunite with my old pal David Frazee on this new record. David was the singer in our band ‘Burning Water’ back in the 90’s, such a strong voice and a very interesting songwriter. David wrote the lyrics and melody on ‘One Tear Away’, it’s got a very haunting feel to it. Here’s what David had to say about the lyrics: ‘They’re an urging to not give up on living, an encouragement to acknowledge and heal the wounds within and free ourselves from self-judgments about being human.’ We cut the basic tracks to tape, we all worked hard to get the record just right, I’m proud of this one and I hope you dig it… Michael.”

Michael Landau has surrounded himself with familiar faces from his past – longtime collaborator David Frazee (Burning Water) on vocals and lyrics that can only be called poetry, his brother Teddy Landau (Raging Honkies) on superlative bass (which should end up on some future top ten lists), Larry Goldings on organ, and Alan Hertz playing drums, and their familiarity gives this album an incredible sense of timing and cohesion. There are myriad twists and turns, and the record unfolds to reveal exotic sounds and feelings, but it’s so well composed and performed that it is like taking a sonic, spiritual vacation.

“Michael Landau is an undiscovered gem… one of God’s guitar players. I grew up playing with him, and he’s really inspired me. Michael is absolutely one of my favorite guitar players in the world.” ~ Steve Lukather, Toto.

Landau is a certified guitar hero, of that there is no question, but this bit of heroism is much like that of, let’s say, Robin Trower – what makes this heroic is not just consummate chops and licks, but a deft sense of style, composition, and taste. There are moments when your jaw drops at the technical prowess on hand, but it’s the songs and the sounds as a whole that make this one of the most satisfying and adventurous trips you’ll take this year.

After growing up on the music of the Beatles, Jimi Hendrix, Cream, and Led Zeppelin, Michael Landau toured the West Coast with Robben Ford before he was an adult. At 19, he joined Boz Scaggs for a world tour before settling down for sessions with Pink Floyd, Miles Davis, Joni Mitchell (he toured extensively with Mitchell throughout the early ’80s), BB King, James Taylor, Ray Charles, Rod Stewart, and countless others.

Rock Bottom is an album for its age. In times of existential angst and cultural unrest, it acts as a spiritual calmative, engaging and holding you without knocking you about unnecessarily along its course. A day trip into the collective consciousness of its players. Listening to this band is akin to watching a thousand birds flying in formation, climbing, diving, circling and back around without ever colliding. It colors its jazz roots just enough to never lose its pop contingent. You get the idea that this record came very easily to those who were creating it, even though it is clear in its sophistication and intellect.