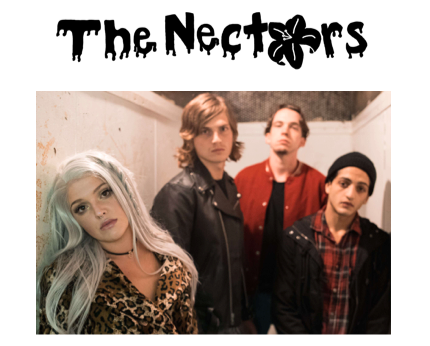 New York alt-punk mavericks The Nectars have today revealed the video for their debut single ‘Heaven’, a three and a half minute ride into art-rock debauchery.

Vocalist Jessica Kenny spoke about ‘Heaven’ to leading NYC publication Substream Magazine, who premiered the video today;“‘Heaven’ is a song that talks about finding strength in the freedom that comes along with ridding yourself of toxicity. Sometimes we get so deep down in a negative situation that we stop seeing the beauty around us, the ‘Heaven.’ I hope listeners can relate and connect to this concept and let it act as a reminder that it’s never too late to free yourself and start living the life you want and deserve!”

Lo-fi and exciting, the video is a perfect snippet of their charisma and raw energy. It showcases a breakneck ride through the electrifying power of their live performance, with its iconic simplicity accentuating their sheer attitude and sass.

“When it came to the video for ‘Heaven’, we went with a DIY approach, low budget, and got it done in a couple of hours! The overall yellowish hue you see in the video felt like it went perfectly with the vibe of the song in general.”

Already kicking up a storm in NYC, their gig at the Mercury Lounge last week has seen instant comparisons to the likes of Blondie and No Doubt alongside the breathlessly trashy excitement of early ’90s indie-popstars such as Transvision Vamp and Daisy Chainsaw.

The band continue their assault on the NYC live scene with a show tonight at Boontunes, and at Meatlocker on the 27th.

Their punk-inflamed guitars, harmonic melodies and raw vocals lay a foundation that’s as influenced by EDM and funk as it is by their scorching live performance. Their approach harks back to the New York punk / pop scene of the late 70’s, but brings a modernity of sound that these new millennial tech-savvy creatives can lay claim to.

The band promise: “We are currently working on our debut album which will be coming out this summer. Stay tuned guys ….and more importantly, Stay Sticky. “