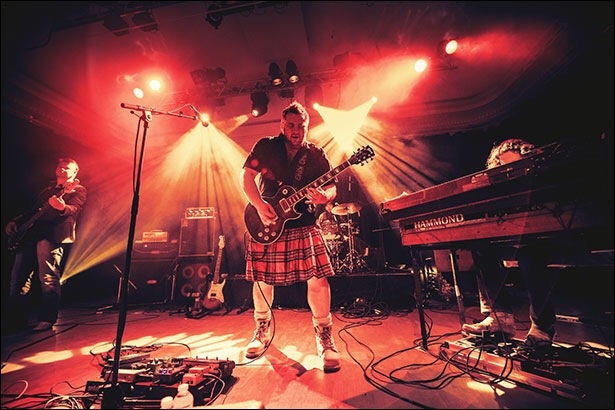 When Walter Trout calls you a genius it’s highly unlikely that you give the remotest of two hoots what MVM – or indeed anyone else – thinks about your music. But no less a luminary than Trout did use that word to describe young Midlander Jones – and watching him it’s easy to see why. “Whisper In The Wind” is absolutely gorgeous, and given room here, it sounds very special. Made even more emotional given that it is dedicated to his best friend Natasha who died seven years ago. The song is a beautiful tribute.

Jones is soon to release album number two and it’s title track, a raucous “Temptation” (written for Trout) is tossed out with something approaching abandon and the slower “Fall From The Sky” is dedicated “to the ladies.”

Jones and his stunning trio close their set with “Stop Moving The House” with all its echoes of Stevie Ray Vaughan and the job has been very much done, yet again. Walter was, on this evidence, close to being right.

King King main man Alan Nimmo has his own take on Jones: “he’s young, he’s talented, he’s good looking. I hate him…..!” Nimmo is, it should be added, grinning from ear to ear when he says this during the third song of his band’s set tonight, a cover of The Fabulous Thunderbirds “Wait On Time.” A few minutes later King King are playing “A Long History Of Love” a track from their 2013 album “Standing In The Shadows” topped off with a Hammond Organ solo from Bob Fridzema and some work from Nimmo himself that proves this band stand second to precisely nobody in the Blues stakes.

The Kilt wearing Scotsman knows this. King King are multi award winning themselves, four incredible musicians and songwriters, they are in town tonight as Nimmo puts it “to play something from all three albums and you just have a good time.”

Honestly, such is a bargain is easily made when songs as good as “Hurricane,” which opened the show tonight. The song – from the new “Reaching For The Light” record out in May – is the perfect opening storm, and the Clapton-esque “You Stopped The Rain” is light and summery in feel.

“Take My Hand” sees things get funky, while “Stranger To Love” – also from that new record – is perhaps the best thing played here. Bonamassa like in scope and skill, it takes glorious twists and turns as it tells its dark tale.

In amongst all this the band find time to pay homage to Nimmo’s fellow Glaswegian Frankie Miller with a superb version of “Jealousy.”

Before the end, a track from their debut record “All Your Life” is played in gleeful fashion, with the band jamming and stretching out (“if anyone feels the need to chat all the way through, there’s a car park out the back” says Nimmo. Perhaps in reference to the hum from the bar during quieter moments). And a lilting “Old Love” provides a fitting conclusion – although the effect of the stunning solo is unfortunately rather diminished by the chatter that the frontman had earlier admonished.

There’s an encore, of course, and “Let Love In” becomes a dancing, clapping singalong, it provides a tumultuous conclusion to a night that barely needed one.

Blues is going through a real boom time at the moment – both in terms of the amount of talent and the number of great albums that are being released, picking a favourite out of the current crop is as pointless as it would be difficult. However, this can be said with confidence: if there is a better package around in the UK than King King and Laurence Jones then someone needs to show us where it is. And fast.