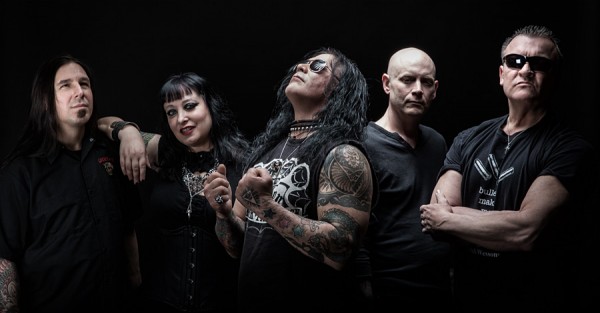 Band who made their live debut in a biker club, release new six tracker

The six song EP was produced, engineered and mixed by Chuck Alkazian, who has worked with rock luminaries Soundgarden, Alter Bridge and Volebeat, at Pearl Sound Studios in Canton, Michigan and mastered by Scott Hull (Sting, Steely Dan) at Masterdisk in New York.

The band describe the album as: “Evoking a sonic mash up of Soundgarden, Clutch, Motorhead and Led Zeppelin.” This is the third release for Dead in 5, who had their live performance debut inside a notorious Detroit biker club in January 2013.

“Schizophrenic Razor Project” finds Dead in 5 evolving both musically and lyrically. “The new songs are more complex and heavier, but also contain some of our most commercial hooks to date. It’s been a natural progression and I think the rest of the band will agree, some of our best songwriting to date,” explains Dead in 5’s lead singer Robert Libres. Lyrically, the new CD explores themes of struggle, overcoming life’s challenges, domestic violence, and even the music business. “We’re like everyone else, trying to make it in the cut throat music industry, struggling to put food on the table, living, loving and sometimes losing…but we’re passionate about our music…and in the end, that’s what we live for,” adds guitarist Peder Seglund.