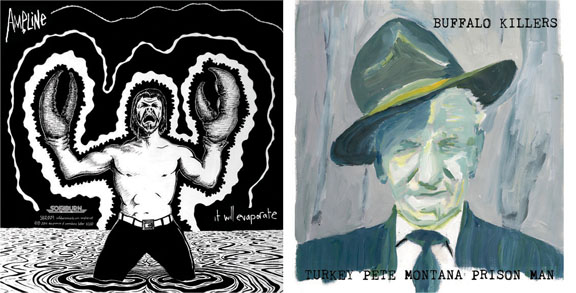 Two Cincinnati bands team up
Two of Cincinnati’s finest, Ampline & Buffalo Killers, have teamed-up for a special split single that will be available through the Dayton, KY-based indie label Sofaburn Records. The 7″ vinyl version, featuring Ampline’s “It Will Evaporate” and Buffalo Killers’ “Turkey Pete Montana Man” is currently available to order online here and will be available digitally worldwide on June 2nd.
Ampline’s Mike Montgomery sheds some light on their track, “We started working on a ‘concept’ album a couple of years ago, about a ship captain in the early 1400s who sets off to find the edge of the world…. like all great accounts of epic sea journeys around that time, his trip is full of fantastic sights and sounds, blurred swirls of cultures and religions and growing discontent with man’s role in life. ‘It Will Evaporate’ is about the narrator’s disbelief in Belief.”
“Turkey Pete was a real person,” says Buffalo Killers’ Andy Gabbard about their track from the new single. “The song is a list of things he did or lied about doing. We heard of him from touring the old Montana Prison. The song wrote itself.”
BUFFALO KILLERS TOUR DATES
June 16 – Limelight Eventplex – Peoria, IL (w/ Rich Robinson)
June 17 – Space – Evanston, IL (w/ Rich Robinson)
June 18  – City Winery – Chicago, IL (w/ Rich Robinson)
June 19 – Midpoint Indie Summer @ Fountain Square – Cincinnati, OH
(more dates to be announced soon)
MORE INFO ON BUFFALO KILLERS:
http://www.buffalokillers.com