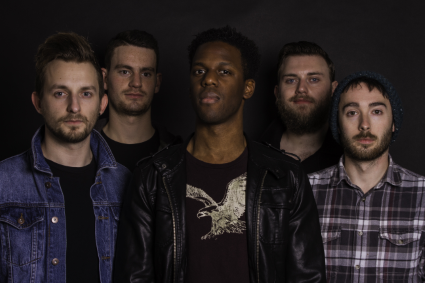 Calm For The Restless are here to make their mark and are loaded with their own buoyant blend of Brit-rock which pulls from the hooky articulation of The Foo Fighters, the sheer rock dynamism of InMe, and the song-writing deftness of Incubus. Serving out a sincere alternative edge with probing guitar rhythms and alluring emotive vocal lines, the rising five-piece have produced a captivating sound that will pound right out of your speakers. The band drop their sophomore EP ‘Destroyed But Not Defeated’ on Friday 4th September from all stores.

Born out of Stevenage in Hertfordshire and consisting of Don Macauley (Vocals), Mart Bradford (Rhythm Guitar & Backing Vocals), Mark Randall (Bass), Tom Holbrook (Lead Guitar) and Mike Westwood (Drums), Calm For The Restless were originally formed in 2012, but it was not until the middle part of the following year that things really clicked for the quintet with the release of their incredibly promising debut EP ‘We Started A Fire’. Since then, the band have relentlessly played throughout the South, and as their growing fan-base will testify, Calm For The Restless are not to be missed.

The band now step up with their sophomore EP ‘Destroyed But Not Defeated’. The record is jam-packed with creative cuts fuelled with strapping riffs and engaging hooks and gleaming with classy contagious melodies and considered arrangements. From the infectious groove and enthralling refrain of their current single ‘After Tonight’, to the majestic and deliciously fluid ‘Blue’, and to the insanely anthemic ‘Bury Me In The Waves’, the alt-rockers employ an uncanny knack for solid melody and dynamics, and have unveiled a breath-taking record that is sure to pilot the band to dizzy heights for the remainder of 2015 and beyond!