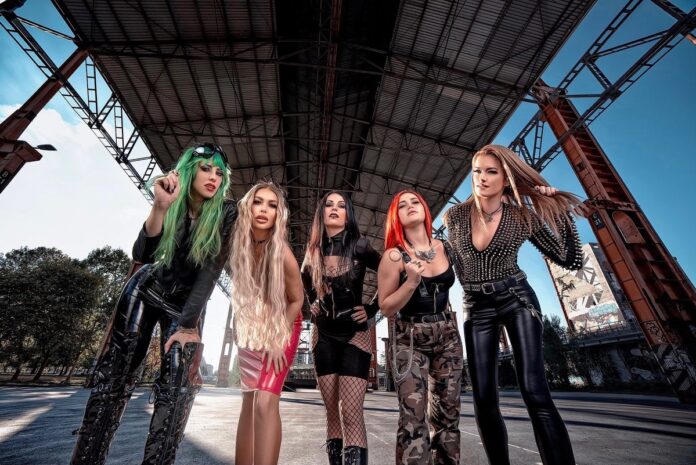 Frontiers Music Srl is pleased to announce the self-titled debut album from the new international metal group Venus 5. Out on 10th June, a second single and video from the record entitled ‘Because Of You’ is available now. It follows the late February release of ‘Tom And Ms. Amy Lee’, the video for which can be seen here: youtu.be/pVjaAUFsG5E

Venus 5 is comprised of five talented singers who all hail from different European countries. In alphabetical order, they are: Herma (also of Sick N’ Beautiful, signed to Frontiers), Karmen Klinc, Jelena Milovanovic, Tezzi Persson (also of Infinite & Divine, signed to Frontiers) and Erina Seitllari. Each is an outstanding vocalist in her own right, but the five of them combined produces stunning results.

Developed by Frontiers label boss Serafino Perugino from the idea of creating a ‘metal’ version of pop projects, time was taken to put the right personnel in place to create the right chemistry and credibility. The quintet of singers chosen and the musicians involved might be from different musical environments, not to mention territories, but together they have a created a monster of an album.

A team effort by producer Aldo Lonobile (Secret Sphere, Timo Tolkki’s Avalon, Sweet Oblivion) and a crack team of writers, musicians and co-producers – including Jake E (Cyrha, ex-Amaranthe), Stefan Helleblad (Within Temptation) and Per Aldeheim (Def Leppard, H.E.A.T) – has ensured that Venus 5 and this debut album offers a feast of musical treats and is not just about its obvious visual appeal.

Venus 5 is recommended for all lovers of the current European metal scene, taking influences from the recent output of Within Temptation and Amaranthe, but adding even more addictive and catchy melodies. It is a totally successful blend.

Previous article
BAND OF THE DAY: OVERLAPS
Next article
YOU WAT, MATE?