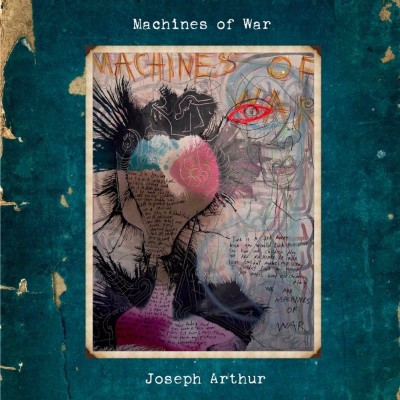 New album out this week, here’s a track

Joseph Arthur has revealed the video for his tender new single ‘Machines Of War’. Coinciding with the US Memorial Day next week, the track was premiered on Flood Magazine and is a haunting and shadowy eclipse of wartime terror beneath the song’s melancholic melodies.

Joseph comments, “‘Machines of War’ wasn’t meant to be a protest song but rather part of the greater story in ‘The Family’. It’s sung from the perspective of my/one’s Grandfather going off to fly a fighter plane in World War Two. But as I wrote it and sung it I did start feeling the emotion of the personal loss war creates. The loss of war factors heavily in the overall story of ‘The Family’ and I felt that that obviously resonated with the current times.”

‘Machines Of War’ is taken from his new album The Family, which will be released through Real World Records on June 3rd and available on vinyl in late June. The album sees Joseph in his creative element, at the hands of his recently acquired 1912 Steinway Vertegrand piano, which he wrote the whole ofThe Family on – a first for Joseph who for the most part writes songs from guitar, and who single-handedly took on vocals, drums, drum programming, pianos, guitars and synths for the recording of the new album.

You can see the piano in question, which was a potent source of inspiration for his raw and emotive writing, in the video for the previous single ‘You Keep Hanging On’, which perfectly captures the dreamscape moods and beautiful arrangements that resonate throughout the album.

WATCH THE VIDEO FOR ‘YOU KEEP HANGING ON’ HERE

The Family was mixed by Tchad Blake, whose previous collaborations with Joseph include the well-loved songs ‘Honey and the Moon’ and ‘In The Sun’, the latter of which has been covered by Michael Stipe and Peter Gabriel.

Joseph also performed at the recent all-star ‘Music of David Bowie’ concert alongside Michael Stipe, Debbie Harry and more with Joseph performing ‘The Man Who Sold The World’. He is also a prolific writer, principally of poetry, and his unique and often unpredictable solo live performances often incorporate live painting and a sprinkling of beat-poetry.

Originally discovered by Peter Gabriel, and subsequently signed to his Real World record label in 1997, Joseph quickly established a reputation as a formidable and creative talent with his experimental folk-rock style, diverse instrumentation and eclectic electronic production elements.

With 20+ albums under his belt, Joseph is as known for his solo records as his collaborations with acclaimed performers including Lou Reed, Peter Gabriel, T-Bone Burnett, Dhani Harrison and Ben Harper of Fistful of Mercy and RNDM with Pearl Jam’s Jeff Ament.