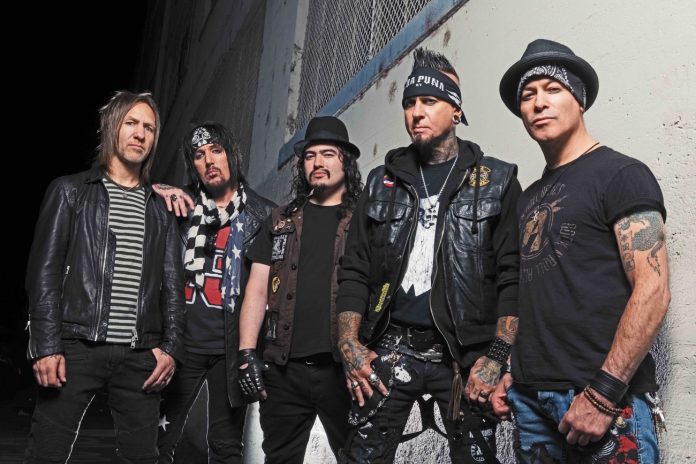 Founded in 1983 by guitarists Billy Rowe and Fernie Rod, Jetboy continues to perform their brand of rock ‘n roll in the 21st century with the same passion that has existed since the very beginning, as exemplified by the just issued video for the title track of their new album ‘Born To Fly’, which will be released in January 2019. The song can be heard and seen here:

Vocalist Mickey Finn states: “‘Born To Fly’ is about the feeling of being meant to do something great and fighting and working to make it happen, never giving up and sticking to your guns to do it on your own terms. Remember, sometimes greatness comes in small accomplishments. If it feels great to you, then it is great! We shot the video on two rooftop locations in the southside of downtown Los Angeles, on one long day and night in July.”

The new album, made by the core Jetboy trio of Rowe, Rod and Finn together with Faster Pussycat bassist Eric Stacy and drummer Al Serrato, is the first full length record by the band since 1990.

A blend of edgy rock ‘n roll with a traditional blues influence, it is the perfect vehicle to exploit the commanding style of the band’s classic sound. “The inspiration for ‘Born To Fly’ came from a long list of influences from bands we all grew up on in the 70’s. Jetboy has always approached writing with a simple stripped down, no nonsense structure, starting with a great riff and a catchy hook.

This album flowed so organically, everything felt like it was meant to be. We have also grown as musicians, which helped capture what we feel is some of our best work to date,” says Rowe.’Born To Fly’ is a fine rock record by any measure, with hints of the band’s 70’s influences and 80’s sound, while adding three plus decades of experience to the grooves. Jetboy is ready to fly again.