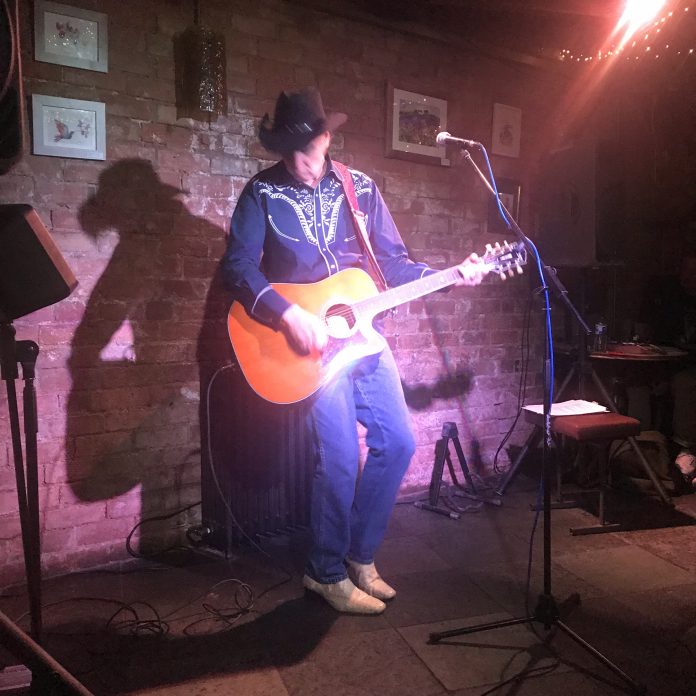 Its apt, really, that Jason Ringenberg plays “One Less Heartache” tonight. “Man, that’s a pretty little tune, I’d almost forgotten that….” He says. It was on his “All Over Creation” album and it was a duet with The Wildhearts – and The Wildhearts, really basically, are the reason I ended up here.

About 25 years ago they released their “Suckerpunch” single. On the b-side is a track called “29X  The Pain”, on which Ginger, the band’s singer, essentially lists all his favourite artists.

It seemed like a good idea, one Sunday night in the pub, that me and two mates should, between us, listen to every band that it namechecked. I got the one that we had to look up. Jason And The Scorchers.

But, as every girl I’ve ever known has told me at some point: “things happen for a reason” listening to the album that I borrowed from the library that week, “Lost And Found” became a real touchstone for what followed and where my tastes went.

All of which isn’t as much of a segue as it might be, because Jason Ringenberg was their singer, and he’s stood not five foot from me when he says those words.

Ringenberg released a record earlier this year. “Stand Tall” was both his first for a decade but also proof that his genius (choice of word deliberate) was undiminished.

It says much for the state of the modern world that his exile was self-imposed (“I didn’t think there was an audience for me,” he confides here) but he is clearly relishing the new record too, given that most of “….Tall” is played across the two sets tonight.

He starts with one. “John Muir Stood Here” is crucial because Muir was the godfather of the National Parks in America and “Stand Tall” came about because Ringenberg recovered his mojo in many ways during his month in as artist in residence at the Sequoia National Park in California.

More or less the show is an even split between the new – “Lookin’ Back Blues” in particular is magnificent – and the old, as most of JATS debut album “Fervour” is played – “Absolutely Sweet Marie” for example. closes the first set.

But there’s another strand to Ringenberg that needs discussion. He’s a wonderful story-teller – that’s almost a given – but he’s a children’s entertainer too. Farmer Jason tours all around the world.

Now, I didn’t expect to be coming out of the show humming a song called “The Tractor Goes Chug Chug Chug” but there you are, and 30 years almost, of gig going teaches you to expect the unexpected.

The second half is just as entertaining. Set up similar to the first, plenty of “….Tall” tunes, including its two brilliant covers “Farewell Angelina”, an obscure Dylan  song and “Hobo Bill’s Last Ride” a classic, old-time country number. These mix with some choice Scorchers, including “Broken Whiskey Glass”, a beautiful “Harvest Moon” and that version of “Lost Highway” that they made their own.

But there’s requests this time too. The popular choice was the glorious “God Bless The Ramones” from the new album, during which, the notoriously energetic Ringenberg slams himself into the wall (“friends I can still rock just as hard, it just takes longer to recover”, he jokes.) Like the first set, though, the showstopper is clearly a Farmer Jason song. “Punk Rock Skunk” is about as good as it gets (and by the way, I am not joking!)

There’s an encore. The Scorchers’ “White Lies”. One of the greatest songs ever made, as it goes, but before it Ringenberg tells some heartfelt stories about the band’s drummer, the much missed Perry Baggs, who wrote the song.

In many ways it sums up the evening that he can do that. Proud of his history, he can also look forward with confidence. Three or four times he says: “I’ve had a great time tonight” and whilst that might sometimes seem forced, it never does here. Maybe Jason Ringenberg never thought he’d get to do this again, whatever he looks like he’s relishing it now, and that absolutely shines through.