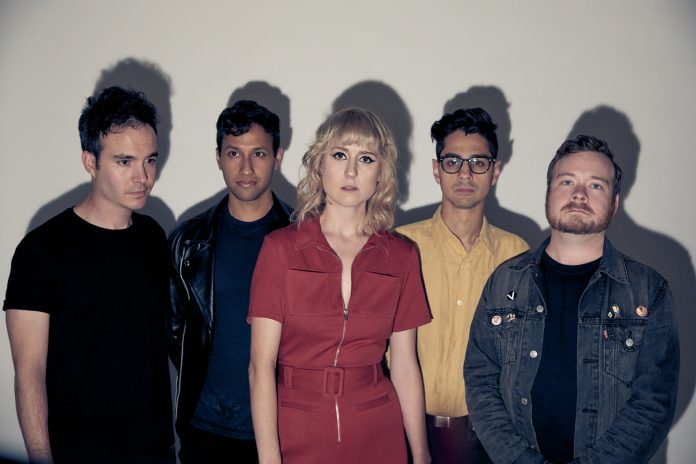 Brooklyn’s underground scene has spawned a noisy, new neighbour in Grim Streaker, who announce the release of their debut album, No Vision on May 17th lead by raucous new single, ‘Today New York’.

Whilst their contemporaries in Bodega, B Boys and Public Practice are pasting the art back into ‘art punk’, the five members of Grim Streaker (made up of singer Amelia Bushell, guitarists Dan Peskin and Micah Weisberg, bassist Bill Dvorak and drummer Piyal Basu) are stamping their incendiary, frenetic noise-punk on growing NYC audiences. This crew is armed with a fierce live show designed to draw blood, sweat and cheers for those searching for an explosion of angular, post-punk energy akin to the likes of Fugazi, X-Ray Spex, The Fall, Sonic Youth and early Yeah Yeah Yeahs.

Grim Streaker emerged in late 2016 when British born vocalist, Amelia Bushell found her way to New York to study, following stints in Switzerland, Canada and California. A bond formed with the rest of the band from inside the DIY music scene allowing Bushell’s inner demons to hit a stage.

Raised in the London suburbs of Surrey, the one-time shy Bushell finally unleashed her personal destruction unit in Brooklyn in 2017 when the band’s rehearsal demos hit underground parties and local dives head on. With personal vices fuelling her quest to destroy, Grim Streaker’s electromagnetic energy won them a reputation as one of the hardest working bands in Brooklyn’s DIY circuit.

“I’ve definitely come to know the highs and lows of living in New York after being here for seven years now, “ explains Amelia. “The songs we write tell the story of those experiences: They’re about people I’ve seen but never met – people I’ve met that are no longer in my life, alcohol and drug use, the all-around hustle (and trying to come to terms with life), the feeling of being a broke loser who is still doing the same shit and not really progressing when it seems everyone else around me is! It’s about the passage of time and how quickly life is moving. One moment you’re there, the next moment you’re here. New York today is an all-out fast way of living.”

‘Today New York’ specifically references themes of waiting tables to pay rent and trying to pursue creativity through music at the same time. It’s about getting carried away with life’s darkest lures, playing a show that leads Bushell to being injured, sexually assaulted and robbed at the end of the night. And after all of that happened, having to go back to the New York hustle of life, day in and day out.

Look out for them in 2019 (including shows at SXSW in Austin), as they become mobile and start wrecking your manor. You will not regret it.