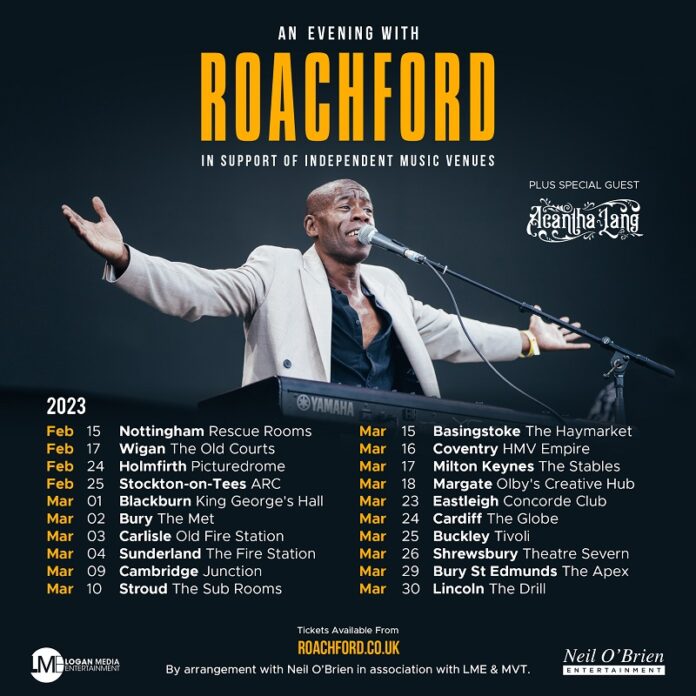 Roachford have announced a 20-date UK tour for February and March 2023 in support of Independent Music Venues.

The dates billed as ‘Evening with Roachford’ will take place from 15th February to 30th March, and follows the band’s recent, much-lauded tour dates and acclaimed new album ‘Twice In A Lifetime’.

Further to Andrew Roachford MBE’s role as a patron for the Music Venue Trust, the tour is aimed to further support Independent Music Venues and bring attention to their latest campaign #OwnOurVenues, which encourages the local music community to buy shares in owning their local music venue to protect and improve UK Grassroots Music Venues.

Andrew said, “I’m thrilled to be staging this tour in support of Independent Music Venues and getting out to more regional cities across the UK, to some wonderful local venues and connecting with fans and some of the places I’ve enjoyed playing at so many times over the years. These intimate shows will be something special.”

Roachford has become one of the most compelling and consistent rock and soul artists the UK has produced. He is someone who channels the energy of James Brown before going on stage each night, and who, on record, summons up the spirit of everyone from Al Green to Joe Cocker.

Roachford has released 11 studio albums and several greatest hits collections, been sought-after as a songwriter by the likes of Michael Jackson, Joss Stone & Chaka Khan, and consistently toured on his own and with contemporaries including Terence Trent D’Arby and The Christians. For the past 10 years, he has been part of Mike + the Mechanics, recording with Mike Rutherford’s post-Genesis band, playing live with them across the world, including the upcoming April-June 2023 UK and German ‘Refueled’ tours.

Continuing his three decades of radio airplay – with 1988’s ‘Cuddly Toy’ still a popular recurrent internationally – Roachford’s latest album ‘Twice in a Lifetime’ scored an impressive five weeks of Radio 2 A List airplay for smash ‘High on Love’ and support on singles ‘Love Remedy’ and ‘Gonna Be The One’ saw the LP crowned Radio 2 Album of the Week.

Throbbing with musicality and soul, ‘Twice In A Lifetime’ is the sound of someone at the top of their game, of one who knows his craft inside and out. Produced by Jimmy Hogarth (Paolo Nutini, Duffy and Amy Winehouse) and featuring several members of Winehouse’s band as well as a duet with UK queen of soul Beverley Knight, the album is full of grit and the most tremendous sonic energy.

Joining Roachford on the bill as special guest throughout the tour will be New Orleans-native rising soul songstress Acantha Langas.

The full list of dates for ‘An Evening With Roachford’ are as follows:

Tickets are on sale now, available at www.roachford.co.uk

Previous article
FENDER OFF
Next article
MAYHEM ON THE HILLS