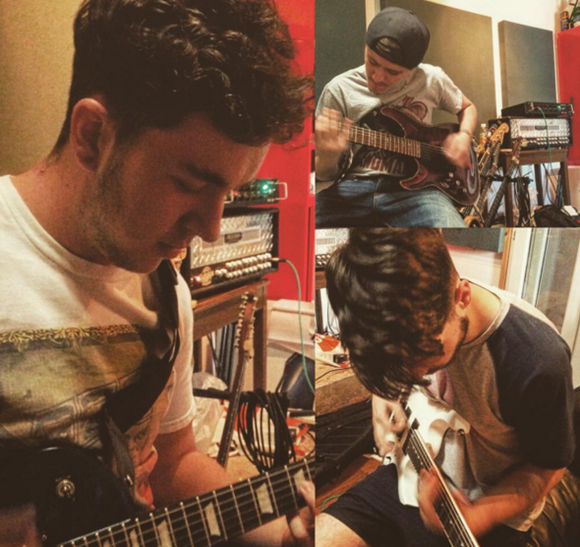 The new album was out a month or two ago. Here’s how they made it

In July 2015 we headed into the studio for the first time to record our debut EP “Homemade Hero”. We’d spent several months prior at a cobbled together home studio setup in James’ flat, where we just met up on our days off and just wrote endlessly from the morning till the night. A lot of that stuff didn’t even make the cut, it was sort of like a treasure hunt really, going through a tonne of ideas until we found things that really stuck with us! We pieced them all together into four tracks and then we headed off to The Ranch a few weeks later to track it all with producer Neil Kennedy.

We booked our studio time a fair while before we really settled down to write, we had a good idea when we wanted to record, but not what we wanted. When choosing the studio we just wanted to go somewhere that had a distinct sort of sound and quality that stood out. James had always had The Ranch Production House on his shortlist since hearing Neil’s work on Nathan Detroit’s previous releases, he just captured the music in this true to life fashion that is hard to come by. After hearing the tracks he’d done with Creeper and Trash Boat too, we were sold on the idea, and it was a great decision – The Ranch had all the bells and whistles and some great producers working there to boot.

Once we got there we went straight into action, we turned up around 10am after a long drive from Oxford, and loaded our gear in, first day was all about the drums. We had a separate engineer called Daly producing on this day as Neil wasn’t very well at the time. As we were between drummers, we had our good friend Dan Cooke fill in as a session drummer. Dan had done that sort of thing before and it was clear he knew the drill, he set-up and got straight to it. We were proper chuffed with how it was all shaping up, Dan really added a lot of flair and feel when he was behind the kit that we hadn’t managed to achieve in the rough demos we did prior, so hearing it all come to life really got us pumped for the days ahead.

Day two started off with endless drum editing before we saw our beloved Jakers hit the bass. Jake had been working A LOT of hours prior to hitting the studio, so we were a bit worried about how well he’d been able to learn them in his spare time. Turns out however we had nothing to worry about at all, after spending an hour or so getting a slick tone, Jake banged out tune after tune like a well-oiled machine, topping off a long but fun day.

Day three was when we met Neil and parted ways with Daly. It was also the day we laid down the rhythm guitar tracks. Neil was all about getting the right tone, we noticed that right from the start, and good tone is what every guitarist wants. When he pulled out the MESA Boogie heads Jim and Max were filled with joy, it was pretty awesome to be able to use such respected piece of gear. Jim laid down the left track of rhythm guitar throughout the EP, and then we did a second take with James (who tends to only stick to vocals) on the right track just to pack it out. It took a fair amount of time just because there was so much to cover, but once we’d got it out the way Max had to step up to the plate.

Considering Max is the youngest of all of us, and it was his first proper time in a studio environment, he was proper calm, composed and prepared, you’d think he’d have done it before, but fair play to him as it helped everything run pretty smoothly.

We finished up the day recording the third guitar with Will, he had helped us write the songs in the weeks prior as he was a close song writing friend of James’, and although he’d originally come along to the studio to play some of the parts he’d written and film a diary, he ended up coming out part of our band, taking us up to six members in total. After a long day of guitar we met another band, Punk On Your Hits, who were staying in the room next door as they were also tracking the same time we were there. They were an ace bunch of dudes who we shared some rum and pizza with; nothing is better than rum and pizza.

Day four was pretty much all vocals, after James spent the morning making strange noises that resembled Marge Simpson conversing with a cow, we got all the gear set up and went to work. Once James started laying his vocals down, the tracks just started to come together and make sense, it was really cool to hear and James had been on point that day, even Neil seemed pretty impressed with his performance. It was a pretty long day of recording, once we’d done lead vocals for each track, we then went over them again to add in layers of harmonies and such, as well as Will’s vocal parts and a small appearance from Jake too during Panama. We got two songs out the way on the Thursday before calling it a day as we were all a little worn out. The evening was pretty awesome though, Jake and Max headed off to watch Trash Boat at the Joiners; James and Jim walked for about an hour until they found a pub, dining on a bit of scampi and steak; Will stayed at the studio and watched Neck Deep tour diaries because we forgot about him.

Day five was our last day, it had been a pretty long night to follow off a pretty long week, so it was a bit of a relief that we’d almost made it through. Especially that we’d made it through without killing each other – although James and Jim had various arguments reminiscent of old couples about washing up and cleaning the room. We closed off day five with the vocals for the other two tracks on our EP, same routine as before, laying down the lead vocals, harmonies, and any extras, including some gang vocals here and there.

That closed off a killer time with Neil, Daly and Dom (Neil’s intern) at the Ranch. It was great to have had an experience like that, recording with friends, making new ones and rekindling old friendships along the way, and just having that opportunity to make our music in such a prestigious environment. After we received the final mixes from Neil, we sent them off to Kris Crummett at Interlace Audio (whose work we had heard on the latest Knuckle Puck & The Story So Far albums) for a final master, and the rest is history! It was a great moment hearing those final masters and hearing everything we’d put together finally finished, a moment of pride and satisfaction we all shared.