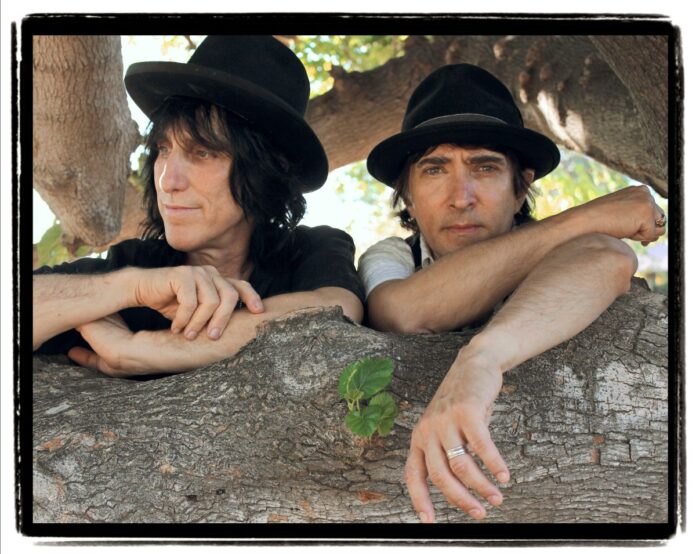 Everybody Rains On My Parade‘ takes the listener on a rough and tumble journey that feels both timeless and immediate. It’s an album full of honest passion for the joyful rebellion of Rock ‘n’ Roll.

Jo Dog and Paul Black are both well known figures in rock circles, playing with a veritable “who’s who” of top shelf musical talent. Jo was first thrust onto the international stage when his band, The Dogs D’Amour, burst out of London with their album ‘In The Dynamite Jet Saloon’ spawning two UK Top 40 hits co-written by Jo.

After The Dogs disbanded, Jo relocated to California and played with Shooting Gallery, Hanoi Rocks’ Andy McCoy’s band, who toured with KISS.  He then worked with Guns N’ Roses guitarist Gilby Clarke – performing on his gold-selling debut album ‘Pawnshop Guitars’.

As well as Sonic Boom, Jo is also working on the debut album from Jo Dog & The Desperados – a trio featuring Jo and his former Dogs D’Amour hounds Steve James and Bam.

Paul is a veteran of the Hollywood rock scene, notably a founding member and the original singer and songwriter for L.A. Guns. His songs ‘Sex Action’, ‘Never Enough’ and ‘No Mercy’ launched the first two L.A. Guns albums to Gold record sales status. In addition, Paul began his career with the legendary underground L.A. punk band, The Mau Maus, whose first album was produced by The Doors’ Robby Kreiger.

With Sonic Boom, the duo have locked into a songwriting groove that effortlessly blends their diverse backgrounds into a cohesive whole.

The 12-track album displays a deep affection for the British rockers who reinterpreted American Blues for stadiums full of young rock ‘n’ roll fans. The Rolling Stones and the Faces loom large as spiritual godfathers, with the grit and authenticity of the Delta Blues masters at the foundation. The songs roll by, distilling the essence of various aspects of these influences into a concise love letter to the rock ‘n’ roll world… as if the great double albums of all time have been compressed into a lean, single disc. Pieces of ‘Exile On Main Street’ are grafted onto bits of Dyan’s ‘Blonde On Blonde’, while the ambition Of ‘The White Album’ collides with the perfectly restrained power of The Allman Brothers ‘Live At Fillmore East’. The title track, ‘Everybody Rains On My Parade’ is an instant classic with lyrics that casually dismiss critics and naysayers with an undeniable pop flourish. The rest of the track list sparkles with gems like the uplifting ‘Tree For Shade’, and the infectious ‘Up For The Late Show’. Elsewhere the epic ‘Blue Like the Morning’ creates a vivid mood that is almost cinematic in scope while ‘Jesus Drives A School Bus’ is a classic blues rocker.

Produced by Gabe Lowry at Fox Force Studios, in Hollywood, California, the album boasts an irresistible muscular swagger balanced with the laid back hip-swing of the coolest records in your collection. Gabe shares additional recording credit on the album with Muddy Stardust. In addition to his work on the production side of the album, Muddy (Burning Tree, Chris Robinson Band) also joins Jo and Paul on bass, keyboards & vocals with Dennis Morehouse (Gilby Clarke) on drums, Tony Snow (Dramarama) on percussion and backing vocals, Chris Joyner (Soul Asylum, Wallflowers) on keyboards, and bassist Tony Babylon (Izzy Stradlin Band, Sylvain Sylvain) rounding out the band.

‘Everybody Rains On My Parade’ is out now on CD, 180gm vinyl and via all digital / streaming sites.