In Favour Of Monarchy 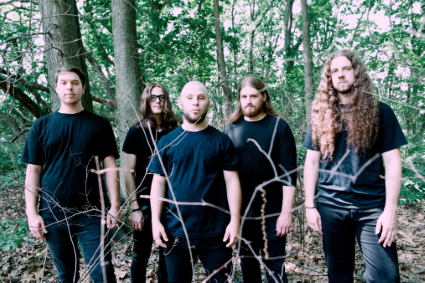 As Rivers of Nihil get ready to release their new one, here’s everything you could wish to know

Rivers of Nihil began their musical journey in 2009, and recorded their first EP, “Hierarchy“, with Carson Slovak. Six years and multiple tours later, the band returned to Slovak and Atrium Audio in Pennsylvania, after having recorded their previous effort “The Conscious Seed of Light” in 2012 with Erik Rutan at Mana Studios in Florida. Since the release of that album and signing with Metal Blade Records, Rivers of Nihilfound themselves quickly climbing the global metal ranks on the strength of overwhelmingly positive reviews and tours with Death (DTA Tours), Obituary, Whitechapel, Dying Fetus, Black Crown Initiate, plus an appearance at the storied New England Metal and Hardcore Festival. During the album campaign, the band was joined by new drummer Alan Balamut and guitarist Jon Topore. Balamut and Topore join guitarist Brody Uttley, bassist Adam Biggs, and vocalist Jake Dieffenbach to form the up-and-coming force of modern death metal that is Rivers of Nihil.

Topping their full-length debut is no elementary task; Terrorizer Magazine declared that Rivers of Nihil “manage to do something unashamedly modern, and yet make death metal sound twisted and malevolent,” while HeavyBlogisHeavy.com simple noted that it was “Definitely one of the best debuts to come out this year.” Guitarist Brody Uttley cites recent personal hardships as a major factor in the creative process for “Monarchy“. Uttley divulges that “I lost a few close friends. The loss of these people had a profound influence on the creation of the music for this record. I was having strong feelings of rage, sadness, hope, and frustration as a result. The songs turned out heavier, darker, sadder, and more frightening than I had ever hoped that they would.” The mood of this album, and the song sequence, reflect these emotions. “Monarchy” begins with the most heavy and darkest tracks, and continues to develop more progressive leanings until the end when Uttley says “the emotional tension completely falls apart.”

Brody Uttley’s home studio and emerging editing skills were put to task to track all of the guitars and bass. This afforded them the time and comfort to track practically stress free. Adam Biggs noted that this approach gave them “all the control we could ask for, as well as the time we needed to create the very lush and layered sound for the guitars that Brody envisioned for the record.” Uttley shouldered the bulk of the song writing load for “Monarchy“. This allowed for Uttley to flex his musical muscles to a larger degree than on previous albums, and even experiment a bit further. Uttley explains: “This album was a big step for us as a band, but also for me personally. I have always wanted to create something from start to finish (more or less) that musically expresses every single emotion that I have experienced during the process of composing the music.” Brody continues: “I have always been a big fan of post rock music and I wanted to write a death metal record that combined the atmospheric elements of bands like Explosions in the Sky, This Will Destroy You, If These Trees Could Talk, and Sigur Ros (to name a few) with the heaviness of death metal.”

Once the songs were ready, the band entered Atrium Studios to record vocals, drums, and to re-amp guitars and bass. Biggs described their time in the studio as “smooth, relaxed and a lot of fun” due to having put in time at Atrium Audio previously. Additionally, both new members brought a renewed vigor. Drummer Alan Balamut recorded the entire album in a day and a half, a respectable pace for even the most studio-hardened of drummers. Guitarist Jon Topore co-wrote “Reign of Dreams” with Uttley, which is an indication of great things to come from the relatively new guitar duo. This is a very new and very hungry Rivers of Nihil on the recording of “Monarchy“.

And let’s not forget the bearded mouthpiece for Rivers of Nihil, Jake Dieffenbach. Throughout the tracking of “The Conscious Stream of Light“, Dieffenbach worked with producer Erik Rutan to refine the vocal approach in both pronunciation and consistency. Those lessons weren’t forgotten, and are a continued focus here. Dieffenbach says that “Everything musically on this album has moved beyond the barriers of what I’ve been a part of before, and gives this river its definable flow, unlike anything we have ever written before, and I am absolutely beyond stoked.”