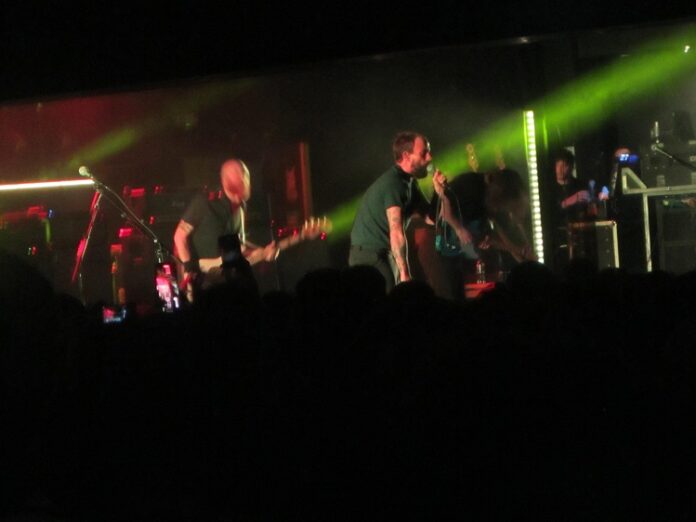 A friend has been championing the Idles for the last four years, he`s already seen them a couple of times live and when I listened to them initially, I have to say I was quite ambivalent to them. I`ve recently started to reacquaint myself with the band and seem to have discovered what I maybe missed first time around. They released their fourth album `CRAWLER` towards the end of last year where the subject matter was more wide ranging than previous but still retained that post-punk brutality that they excel in

There`s no fanfare, just the lights dimming and the band appearing on stage and sharing the opening track `Colossus`, A kind of diatribe on the dangers of toxic masculinity, which is shared in an almost confessional style, a track the begins quietly and grows before bursting into life.

A cracking way to announce your arrival and laying down a marker for what was to follow. The intensity continues as the band storm through the hypnotic rhythmic strains of `Car Crash` and the energetic `Mr. Motivator`. The video for this song is compulsive viewing.

`Grounds` follows, a song that deals with self- belief, racism and coming to terms with Britain`s colonial past before we head into `Mother` which is an appreciation of women like singer Joe Talbot`s mother who do so much which goes unrecognised. The line “ the best way to scare a Tory is to read and get rich” is belted out and repeated by this fanatical audience. We have another few powerful cuts with `Crawl`, the mesmerising `Divide and Conquer` and `I`m Scum` before things slow down briefly as the band shares the ballad almost waltz like `The Beachland Ballroom` which relays the band`s rise in popularity.

It`s back to where we left off with the pounding `Never fight a Man with a Perm` which deals with some of the singer`s past violent behaviour and `1049 GOTHO` which seems to relate to mental health issues. I always feel there`s an Adam Ant drum vibe to `The Wheel` which touches on the difficult subject of alcoholism. `Reigns` is a rhetoric on the divisions in class society which is delivered with just the right amount of hostility before `Television` a blistering offering on the positive benefits of appreciating your own personal value and worth.

There`s no let up during the home stretch as the guys deliver `MTT 420RR` a potent number which was written about the singer`s struggle with substance abuse, `WAR`, `Samaritans` a number which refers to questioning one`s sexuality, essentially male, which has the cracking line of `I kissed a boy and I liked it` thrown in and `Danny Nedelko` a tribute to the singer`s Ukrainian friend and member of the band Heavy Lungs which has a wider reflection on immigration.

Tonight, the show closes out with `THE END` which lyrically is immense, sort of referring to how cruel life can be but at the same time so rewarding and the anthemic `Rottweiler` about which the singer has said “It’s a war cry where I wash my hands of the torrid hateful tabloid press and put my reading glasses on”.

I felt pretty drained after this ninety minute sweltering performance, an all-encompassing emotional experience where the band threw everything into it including the kitchen sink. The subjects shared are brutally honest and resonating and at times a little challenging but they are shared against a robust but captivating cacophony of captivating sound.

There`s another eight dates in the UK before the band head to Europe and although the sold out signs are showing for most, it`s always worth checking as it`s a tour you`d be kicking yourself if you miss out on. I assure you these guys are on fire.