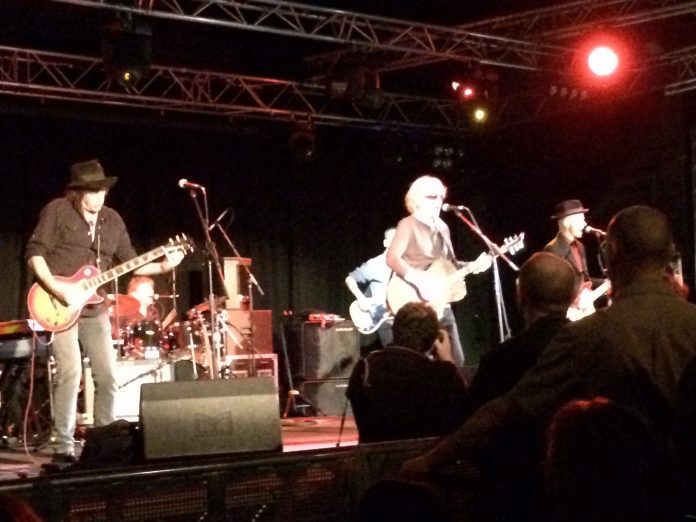 Ian’s still got the lot, not just Mott

Given everything that’s happened recently and the deaths of people as inextricably linked to both his career and life as David Bowie and former Mott The Hoople bandmate Dale Griffin, it seems perfectly reasonable that Ian Hunter seems concerned with mortality. Thus it seems equally appropriate to begin this review at the end. Not the abstract and the end of life, but the literal, the end of the gig.

Hunter – looking a damn sight more sprightly than a 76 year old has a right to do – returns to the stage for the encore with “Rest In Peace”. At its conclusion he simply says: “I don’t think I need to say any more, really, do I?” He doesn’t and it’s typical of his understated attitude to things that such an ostensibly throwaway remark is the only mention of Messrs Bowie and Griffin who died within days of each other. Indeed, straight after those words he’s is into “Life” – the wonderful last track from his 2012 tour de force “When I’m President” – which is full of knowing nods and winks and has the lines “I can’t believe you’re still here, I can’t believe I’m still here” but perhaps even more crucially “when you’re down remember that, it’s all water off a ducks back” – if this is the Hunter urging us to make the most of every day, then the copper bottomed classic that it segues into “All The Young Dudes” is his own way of doing it .

In town for the first of three shows, Hunter And The Rant Band are formidable performers. The 100 minutes they are onstage showcase not just what a back catalogue he is, but how many different styles it covers too.

Arriving to the initially electro throb of the slow building and ultimately explosive “(I’m The) Teacher” soon that familiar sneer of “‘ello, ello’ ‘ello, ‘ello” that begins “Once Bitten,Twice Shy” which still packs a punch after all these years. Arguably, though, even better is another of “….President’s” best tracks, the Dylan-esque “Just The Way You Look Tonight” a ballad which suits Hunter’s slightly cracked, road worn 2016 vocal style perfectly.

An artist so experienced knows, though, that the classics need playing. So it is, that a selection of Mott The Hoople songs are given their head. Not without a typically acerbic intro or two, however. “Honaloochie Boogie” is prefaced, for example, with the line “a lot of people still like this. I don’t count myself as one of them….” But whether he wants to admit it or not, there’s something special about both it and “Roll Away The Stone”.

As, in fairness, there is about the rest too. “Boy” is an emotional journey, “When I’m President” itself is fantastically defiant, “Ta Shunka Witco (Crazy Horse)” is diverse as it gets and who doesn’t love “All The Way From Memphis”? There’s even time for The Velvet Underground’s “Sweet Jane” to close things on the main set and bring us back to where we came in, and the end.

Showing no signs of slowing down and with a longer tour booked this November, Ian Hunter is the living embodiment of rolling with the punches and surviving. He’s right, too. It really was a mighty long down rock and roll from Top of the Pops to a wet, windy night in the Midlands, but it’s still a trip that was surely well worth the sacrifices.