I PREDICT A THREE WAY RIOT 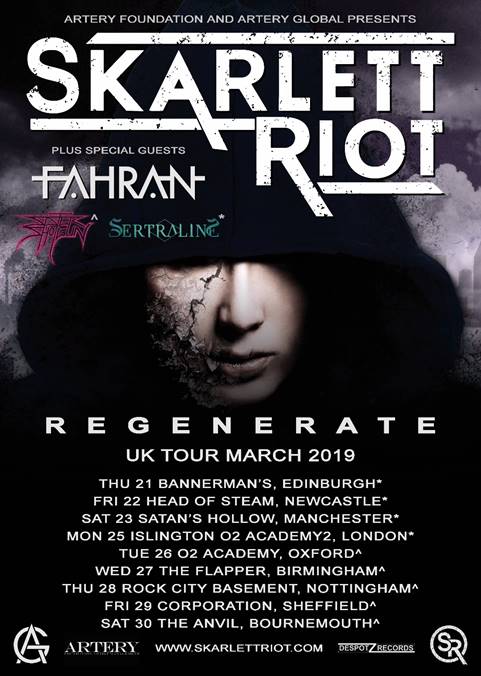 Highly rated UK modern metal quartet Skarlett Riot are excited to announce their March 2019 headline tour. And they’re bringing three of the U.K.s best up and coming bands with them as support!

After the release of their acclaimed ‘Regenerate’ album, Skarlett Riot are happy to announce their next UK headline tour. A celebration of the best of the UK modern rock and metal scene, the band are bringing three of the U.K.’s brightest hopes with them, including; Fahran, Sertraline and Sister Shotgun!

After the success of their ‘Sentience’ EP, hard-hitting UK quartet Skarlett Riot soon began to attract interest from far and wide. Signing deals with TKO Agency and The Artery Foundation management were just the beginning for this highly rated act – soon they had signed a world-wide record deal with the pro-active and forward thinking Swedish label Despotz Records.

With the ink still drying on their contracts the four-piece, led by the unique and passionate vocals of Skarlett, headed back in to the studio to begin work on what would become their critically acclaimed ‘Regenerate’.

The new material is harder, heavier, faster but still driven by the anthemic hooks that have kept this band at the forefront of the UK modern metal scene.

Previous article
NEW VILLAINY
Next article
BAND OF THE DAY: DIVIDE THE EMPIRE