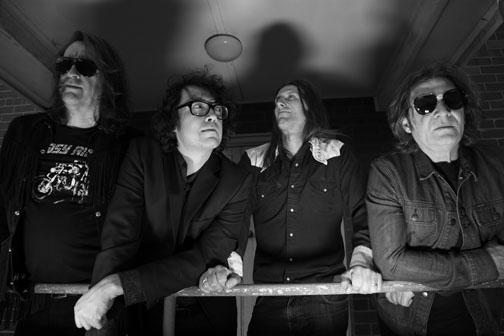 July 1, 2015
Reading time: 1 min.
Facebook
Twitter
Pinterest
WhatsApp
Linkedin
Email
Print
Telegram
Copy URL
By Andy Thorley
New video from Datura4
The brilliant Datura4 release their debut album on 10th July. Andy’s review will om MVM this weekend. In the meantime, here’s the brand new video for “Out With The Tide.”
Hailing from Fremantle in Western Australia, Datura4 is the brainchild of Dom Mariani (frontman of legendary Australian garage rockers The Stems and Power Pop favorites DM3) and Greg Hitchcock (former You Am I and one-time New Christs’ guitarist). In 2011 they joined forces combining a shared passion for full-tilt boogie, psychedelic rock and progressive blues.
Along with drummer Warren Hall who previously played with The Drones and bass player Stu Loasby Datura4 have been steadily building a reputation in their hometown with their live performances. With a healthy nod to early ’70s Australian Psych/Blues/Boogie from the likes of Buffalo, Coloured Balls, The Aztecs and latter era Masters Apprentices, Demon Blues represents Mariani & Hitchcock’s love of hard hitting bell-bottom blues.
The psychedelic cover art is by Joshua Marc Levy/Asheville Art Family.
Datura4’s Demon Blues will be available on limited colored vinyl, CD and digital formats July 10th via Alive Naturalsound Records. The CD will include one bonus track not available on other formats, as well as alternate cover art.
FOR MORE INFO ON DATURA4:
https://www.facebook.com/Datura4
Previous article
Polka Metal Trailer Ahoy!
Next article
This Definitely Is Not A Scam