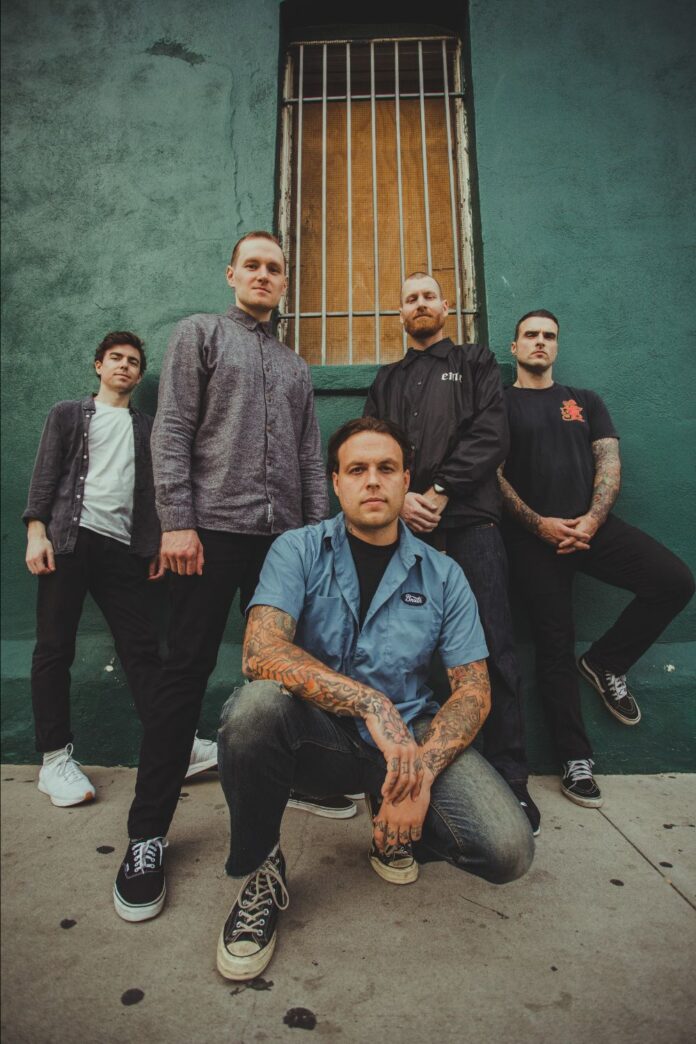 Orange County, California hardcore band Stick to Your Guns who release their new album, Spectre, on July 29 via End Hits Records, have shared a new single, ‘Hush’ – a powerful track with an equally powerful subject matter.

Stick To Your Guns are without doubt – one of the most influential hardcore bands of our time.

With new album ‘Spectre’, under their belt, Stick To Your Guns have delivered twelve brand new and convincing arguments that should once again establish their relevance in the hardcore scene.

Born out of a collaboration with Drew Fulk (A Day To Remember, Bullet For My Valentine, Ice Nine Kills and many more), Stick To Your Guns showcase the sonically strongest side of their career. With an organic sound and flawless production, ‘Spectre’ is the band’s most contemporary album to date.

One reason for this is their songwriting approach, which clearly shows that the band does not repeat itself, instead innovatively working on honing and reinventing their own sound. Even if the sound strays away from the common steps of a hardcore band in places, singer, Jesse Barnett, convinces and in crystal clear fashion too, that the principles and sincerity of Stick To Your Guns are always present. “Not many hardcore bands can say that about themselves.” In doing so, the Californians were even more focused and precise than before when writing ‘Spectre,’ as Jesse describes. “We quickly told ourselves that we are Stick To Your Guns and we knew exactly what that means for a new album.”

Proof of their appreciation for big choruses, comes with, ‘Weapon’, which hits like a hurricane. Between the balladic ‘Open Up My World’, which could almost be taken as a hardcore homage to Basement, and the aggressive and riff-heavy tracks like ‘Who Dares’ and ‘Liberate’, Stick To Your Guns largely show themselves as you know them: boasting precise riffs, groovy beats and melodic components that create irresistible hooks. ‘Liberate’, a politically charged anthem that Jesse Barnett exposes as one of his favourite tracks on the album, is dedicated to pan-African communist, Thomas Sankara.

‘The Shine‘, in particular, stands out, with its strong musical and lyrical narrative. The song itself deals with the capitalism of our world, as Jesse tells us.

“We have failed time and time again to see it for what it is. Like fish we get attracted to the shiny lures that we mistake for freedom and then get hooked onto their lines and reeled in. We think to ourselves “I know this is bad and this system has made slaves out of everyone I know and love, but it will be different for me”. Fuck that. There is a global awakening happening. This cannot be denied. And my only purpose is to pour gasoline on the fire that is growing in the hearts and minds of working people and all people in general. There is a quote by someone who I can’t remember at this moment that says, “we are attentive to what we measure”. I’m done measuring my life and the world in terms of what I can get from it. In terms of who can get me what. In terms of extraction. In terms of how can I get more money. I have evolved and I. know measure my life and my relationship with the world and society by more meaningful criteria. That is the spectre that is haunting me and there is a Spectre haunting the entire world.”

Stick To Your Guns effortlessly showcase the breadth of sound, conveying their message through writing that can serve up uncompromising breakdowns as well as clever poppy choruses. In addition, atmospheric post-hardcore influences flash across the rousing track ‘Father‘, which was written entirely by Chris Rawson and deals with the death of his own father. Completed by a touching spoken word interlude, ‘Father’ goes even deeper under the skin.

Socialism, love, unity. These parameters are at the core of what Stick To Your Guns want to convey on ‘Spectre.’ “There’s no compromise for anything else,” Jesse says. “It’s about educating people about the ills of this world, and it’s become our commitment to save this planet.” Accordingly, the album advances to a socio-critical opus that speaks for the thoughts and worries of many people of today’s society.